Games of all sorts are a fantastic way to connect with people whether they’re old friends or you’ve just met. Whenever my partner and I move to a new area our first priority is finding a local game group, and a few of those folks always wind up becoming good friends. For women this can be a little intimidating – sometimes game spaces seem very male dominated, or one or two of the members can be unintentionally (or intentionally) creepy. In the past decade gaming has seen the rise of girl-friendly or girl-only groups both to build positive space for established lady gamers and to create a welcoming environment for new ones. I caught up with Board Game Grrrls facebook group founder Saille Warner Norton this week to talk about games, grrrls, and the importance of  inclusive game spaces. 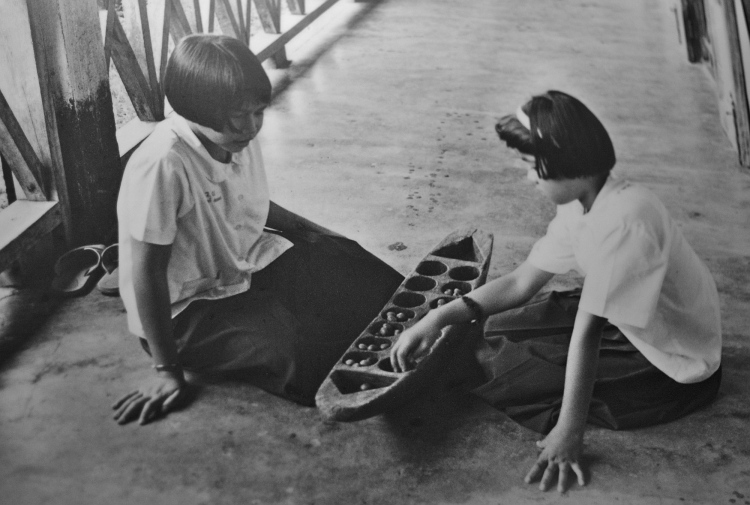 Why did you start Board Game Grrrls?

I did it on a whim after Yet Another Awful Thread on another FB board game group. I’ve always been community orientated, and I am one of the admins on another female focused geek group, so it was an easy jump for me to create. I thought I’d maybe get a handful of other female gamers to chat with about gaming. I used “Grrrl” because I came of age during the Riot Grrrls movement of the 90’s, and I think that history and meaning is suitable for us today.

Whats your favorite game? Least favorite? Why?
I have yet to pinpoint my favorite game. I have a number of games that I will always play.  Currently, I’m on a Sagrada kick. I also love Tokaido and Karmaka. Both games are beautiful. My favorite games tend to be ones with gorgeous art and mechanics that match their themes. I also play quite a few 2 player abstract games, like Santorini and Onitama, with my eldest. He’s been playing chess since he was 7, and its one of the only ways I have a chance to beat him!  My least favorite is hands down, Cards Against Humanity. CAH allows people to bring out their worst selves under the guise of a game. It is all the -ists rolled into one. I really don’t understand the fun of that. Now that being said, I hold great respect for the company for putting their ill gotten gains towards a greater good. I’m just not sure the ends justifies the means in this case.
Do you feel like the game community is general welcoming towards women? How could it be improved?
My local community seems very welcoming, in general. Several of our local game stores are woman owned. But I know that is not the situation across the board. I hear reports all the time of women being treated poorly by both store employees and other gamers at the table. One would think in this highly competitive market stores at least would be more welcoming and inclusive. Private gaming groups seem to be much more welcoming. But issues still come up. I think awareness is the number one way to improve inclusiveness. We need men to step in and be the ones calling out misogyny and sexism in our gaming communities. Women need to know that our gaming spaces are safe and that should there be an issue, other players have our backs. Unfortunately, I think online communities still have a very long way to go.

How long have you been gaming?
My siblings and I played board games and cards all the time. In fact, when I was 10 or so, I used my birthday money to buy Payday. And then played it all the time. My parents and extended family frequently played cards, so we kids just followed suit. I grew up playing Pitch, Canasta, Gin Rummy, 31, Kings In The Corner, Hearts, Spades. The late 80’s and early 90’s were an explosion of the party game genre, and games like Pictionary, Balderdash, Scattegories, Taboo, and Trivia Pursuit were all the rage. During college, there as even a local Pictionary tournament, which I and my team won. After college, I was more involved in CCGs, tabletop RPGs and LARPs. I got involved in hobby board gaming after my youngest was born. A friend brought over Carcassone and Puerto Rico, and that was all she wrote. So I think I can safely say I’ve been gaming for 40 years.
Why do you think its important to have female specific game spaces?
Many women seem to think they’re anomalies as female gamers. We’re not! Female specific spaces allow us to find our tribe, to realize we are not alone, and to share our common experiences. For women who are already marginalized in our wider society, and then marginalized in this very small niche community, these things are invaluable.

Who would you recommend Board Game Grrrls to and why?

I would love to be able to reach each and every woman gamer out there. Because you do not have to go it alone. We have had a number of members meet up in person at this point, and I absolutely love that BGGG has been a part of women finding other local women gamers. I have hopes that someday we’ll be able to do that on a larger scale, and be a recognized force for change within the wider gaming community and industry.

Board Game Grrls has grown in just six month to over 1200 gamers. The group is always abuzz with chat ranging from game suggestions to rules mechanics. The Grrrls are quick to answer questions and always welcome new gamers. Join the conversation at Board Game Grrrls on Facebook here.