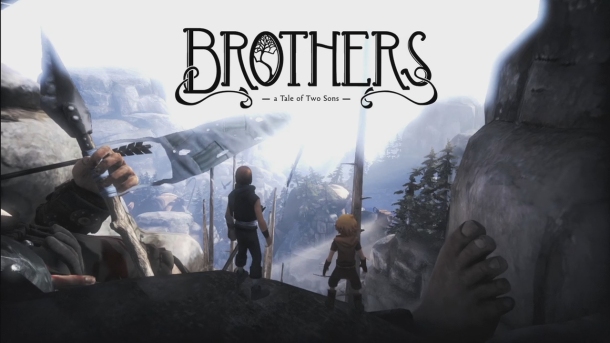 I may be late to the boat on this, but I finally got on it and I have to say I am glad I didn’t miss it! Brothers: A Tale of Two Sons is a game I’d have never gotten myself. I’m not particularly into just straight up puzzle games and it seemed a bit boring compared to my usual onslaught of FPS and horror games. I have to say that I am delighted to find out how wrong I was.

What’s it about?
Well the gist of this game is the mother of these two brothers has died, leaving them with only their father. The father then gets sick, threatening to leave the two brothers orphaned if they do not find a cure. The boys go out on their own to retrieve a potion that will help save their father’s life and, through that, go on an amazing adventure that takes trust and teamwork for them to survive and accomplish their goals.

What did I think?
From the simple description, you might think it was perhaps easy and pretty boring. Though the game only took me around 5 hours to play, I can say for certain it was neither simple, nor boring. One part that threw me off for a moment was the mechanics. This is a controller based game; one side of the controller controls the big brother, the other baby brother. This, for me, was a unique addition to the game. This controller setup can be a challenge to figure out. Once you get used to it, however, it is a major part of the game and helps you feel connected to the characters.

As I said in the beginning, this was not a game I would have picked for myself. The fact that it is a puzzle game would have put it far down on my list. A friend gifted this game to me and I played it for them. Getting that chance to do so made me mentally invest in one of the most beautifully crafted and emotional games I have ever played. You will feel the feels with this game and once you get to the end it is a satisfying finish.

The puzzles can be a challenge because you not only work one brother but both simultaneously to accomplish a lot of things in this game. Figuring out how they both work together sometimes can be a struggle, but not so much so that it becomes frustrating. This is good since I will give up pretty easily if it gets to be ridiculously hard. Usually, if I can’t shoot it or kill it somehow, it is not worth my time. This game, being out of my comfort zone, did a perfect job at keeping my attention and not making me want to give up.

I am gonna say the replay value is probably moderate. There are challenges you can accomplish which is part of why I am going to be playing it again, but also just for pure enjoyment of playing and exploring the world that I was hesitant to explore the first time around is appealing. The fact that is a short game also makes it very approachable when it comes to replay as well.

One last note, this game is BEAUTIFUL. How the creators tell this story visually, how they do dream sequences and just everything. It is a trippy experience in parts and just an amazingly stunning one everywhere else. You get time to take in the sights at various benches throughout the game and I highly suggest that you do just that!

I could gush over this game for a long time, but really you have to play it to really understand what a little treasure it is.

Do I recommend it?
It is a wholehearted yes from me! Yes, I would recommend it. If you get the chance to buy it, please do and take the 5 short hours to play. You can get it on Steam, Xbox One, and PS4 consoles for around $20. I think it is well worth the price.