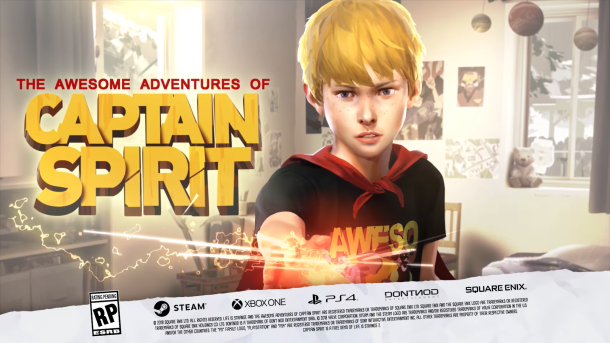 At E3 2018, DONTNOD Entertainment announced that they would release a new, free-to-download game at the end of June, set in the same universe as Life Is Strange. The game turned out to be more of a demo that sets up Life Is Strange 2, titled The Awesome Adventures of Captain Spirit. It’s available on the PlayStation 4, Xbox One, and Microsoft Windows. While Captain Spirit only takes about 2.5 hours to complete, it felt wonderful to be back in the Life Is Strange-verse, even for a little while.

Captain Spirit stars a new character, a nine-year-old boy named Chris with an active imagination. He lives with his father; both are struggling to cope with the sudden death of his mother. His father does this through drinking; Chris does so by pretending to be a superhero called “Captain Spirit.” In the game/demo, your objective is to complete a number of “awesome” things that Chris has planned for the day.

First things first, a trigger warning: the original Life Is Strange dealt with some very heavy topics, including suicide, abusive parents, and kidnapping/assaulting young women. The Awesome Adventures of Captain Spirit doesn’t get as dark as the first entry in the series. (It doesn’t have the same amount of time to do so anyway.) But it does show Chris with a dad who drinks heavily; it’s strongly implied that he’s physically hurt Chris when drunk, and he verbally lashes out at him more than once, depending on the choices you make. He’ll almost immediately backtrack and apologize, and he’s clearly trying to be a good parent, but that doesn’t excuse his actions at all.

My own parents are loving, supportive, and have never given me anything worse than a lecture. So, while I can say that I liked how Chris’ story was written, I can’t say whether or not his relationship with his father was handled correctly.  Regardless, if this situation hits a little too close to home for any of you, you might want to play something else.

That said, I immediately identified with Chris in another way. He spends a lot of time in his room or in his yard, playing with his toys as he acts out their adventures battling his arch-nemesis, “Mantroid.” I couldn’t stop smiling, because that’s exactly how I used to play with my toys. He does feel like a real nine-year-old kid.

There are a few little shout-outs in the game to remind you that Captain Spirit takes place in the same universe as Life Is Strange. This initially gave me the wrong impression that Chris might be related to Max or Chloe somehow. While I missed the previous cast of characters and would’ve liked to see a stronger link to them, I liked Chris so much that, ultimately, I didn’t mind switching over to his world.

The game plays the same as Life Is Strange, in the sense that you’re choosing what you want Chris to do and how to respond. But Chris doesn’t have time travel powers, so you’re stuck with the consequences of whatever you do. That felt weird at first. I’m used to trying something out, rewinding, trying something else, and then picking which outcome I liked best before proceeding with the story.

There’s also a hilarious mini game that you can play if you can unlock Chris’ dad’s phone. It’s a side-scroller starring “Hawt Dawg Man,” who dodges obstacles with his mustard jetpack. Although I never beat Chris’ high score, I had a lot of fun trying. It’s a nice bonus to flesh out the game and gives you something else to do besides your short list of tasks.

Captain Spirit ends on a good cliffhanger and I’m looking forward to seeing more of Chris’ story in Life Is Strange 2. The first episode of that game will be released on September 27 for the same systems as Captain Spirit. If you loved the original Life Is Strange, you’ll love this one too. And if you’ve never played a game in this series before, this is the perfect way to get a sense of what they’re like and whether or not you’d enjoy them.