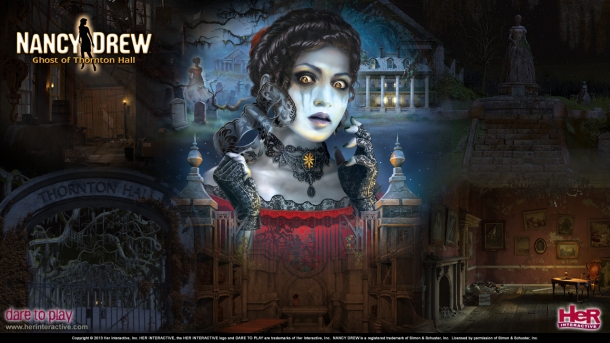 If you like point-and-click adventure games and/or enjoyed reading the Nancy Drew books growing up, you owe it to yourself to check out Her Interactive’s Nancy Drew series. All of the games are playable on Windows, and everything from Trail of the Twister onwards can be played on Macs as well. There are even step-by-step guides on Her Interactive’s website about how to play the older games on updated Windows systems and how to play them on your Mac with the Wineskin emulator- a nice gesture on their part.

Each game follows more or less the same route: Nancy arrives at a new location, gets the initial scoop on the mystery, and starts questioning the suspects (usually 3-5 people). Sometimes everything starts out calm, and then after completing a task or two, the theft/murder/kidnapping/whatever takes place. After that, you follow the trail of clues, continue questioning suspects, and solve lots and lots of puzzles to crack the case.

The game that I recently finished, Ghost of Thornton Hall, begins with Nancy receiving a phone call from a paranormal investigator in the middle of the night. A woman named Jessalyn Thornton disappeared during her bachelorette party. It appears to be a kidnapping, but some believe that the culprit is a family ghost, Charlotte.

Charlotte died in a fire under mysterious circumstances, so Nancy finds herself solving two cases: who kidnapped Jessalyn, and what’s the story behind Charlotte? Was her death truly an accident? Is her ghost really haunting the family mansion? And what does this past tragedy have to do with Jessalyn?

Growing up, I loved playing the Nancy Drew series, but as I got older, I began to lose interest. I’m not sure if there was an actual drop in quality or a change in tastes, but Ghost of Thornton Hall felt like a return to form. In fact, it was even better than some of the classics that I’d loved to play.

Other games in the series would have a great premise, but then wouldn’t completely follow through with it. For example, as much as I loved Ghost Dogs of Moon Lake, you only encounter the ghost dogs once at the beginning of the game. When you venture out into the woods at night and hear the howling, it’s terrifying- at first. But after a while, you realize that the ghost dogs aren’t going to pop up, and that takes out a chunk of the tension.

In Thornton Hall, Charlotte’s ghost does pop up throughout the game, and you never know when she’ll show herself. Other times, you’ll hear eerie singing, or something will scuttle across the floor, or a statue will turn its head. The whole game takes place at night and the music is beautiful, but grim. Combine all of these elements, and you get a genuinely creepy game.

The suspects all have intriguing backstories and memorable personalities. I was constantly guessing who might be the culprit. Sometimes it felt like all of them could have done it, and other times it didn’t feel like any of them could have done it. I found the reveal satisfying. And while the culprit is always the same, this Nancy Drew is unique in that it has three possible endings.

It’s hard to gauge the fun and difficulty of the puzzles, as that’s going to depend on the person playing. The longer I game, the more I’ve come to realize that everyone’s brain works differently, and what seems so easy for one person is next to impossible to solve for another. I did find the final puzzle very frustrating, due to the fact that it was just a more challenging version of one that I’d already completed. But if you need help figuring out what to do, you can consult the Task List that Nancy keeps with her. In Amateur Detective mode, you can also select hints that tell you how to complete the puzzles.

I’m so glad that I played Ghost of Thornton Hall. It had the same magic as the classic Nancy Drew titles and then some. Now I want to check out some of the other recent titles that I missed!