Aggretsuko is an anime that centers around a socially awkward office worker named Retsuko. Retsuko is like many of us. She dreamt of joining the workforce but now that she has spent a few years in it she can see that her “dream job” isn’t all that she thought it would be. 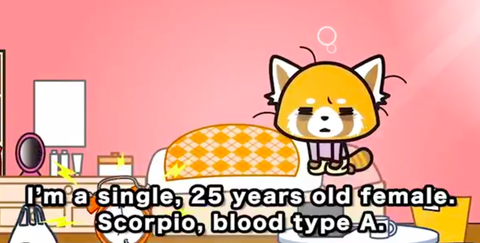 As if dealing with the pressures of working for a big company weren’t enough Retsuko also has an interesting cast of characters surrounding her. Her boss is a chauvinist pig. She has gossips to deal with. A flighty friend whose life is the opposite of hers. Extra work is constantly being given to her. How is a girl supposed to deal with all of that stress? Secret sessions of death metal karaoke of course.

Aggretsuko is a surprisingly refreshing anime to watch. I was unsure how I would feel about such an, well for lack of a better term, ordinary anime. The character designs are adorable. As they should be since Retsuko started out as a mascot for Sanrio. I love the difference in style between every day at the office and when Retsuko is singing death metal. Different musical styles are also featured throughout the series.

So if you are looking for something funny and relatable I would suggest Aggretsuko. It is a must watch anime that is a great palate cleanser!

One thought on “Aggretsuko: An Anime Review”