I like weird movies. I like magic, dragons, faeries, and mysteries. I also enjoy period pieces and anything that can suck me in and not let go. You will find much of this in Jonathan Strange and Mr. Norrell on Netflix. I was just searching for anything random to watch and stumbled upon this image of a man in old clothing and a white wig. Well, let’s see what kind of period piece is this? A magical one!

Bertie Carvel plays Jonathan Strange and does a superb job portraying a young man who wants nothing more in life than to love his wife, Arabella, and read and practice magic. He has such a love for it that he will do anything to keep learning more, until he realizes that may lose him what he holds most dear. Charlotte Riley is Arabella and she does a wonderful job trying to keep her husband with her and on the path she feels is right. All the while, Mr. Norrell (Eddie Marsan) is in the background silently messing everything up.

Eddie is amazing at being this introverted magician who wants all the knowledge to himself while simultaneously wanting magic in England. He hoards books full of spells and stories of how magic was once there and is vehemently afraid of what would happen if he doesn’t have his books. He does everything in his power to make sure the books are safe with him and that magic is only what he thinks it should be. Gloriously ignoring what it used to be and what it could be again. That is, of course, til the end.

But I’m getting ahead of myself. We foray through history into war scenes and zombies raised from the dead. We go to lavish parties and political meetings and all the while I’m thinking, wouldn’t it be great if magic was real and we got to use it like this? It’s more a practical approach to magic here. No flying on broomsticks or presenting kings with riches. It’s helping the military stay alive, healing the sick, and eventually trying to stay alive.  It’s entirely about magic coming back to England and making it better.

My favorite part of this show is Lady Pole, The Gentleman and his world of Lost Hope. The Gentleman is played rather majestically by Marc Warren and Lady Pole by Alice Englert. I absolutely loved Alice in Beautiful Creatures and could not figure out why I loved her so much in this show until I read her IMDB profile. She is just an actress that can really get into character. Thanks to Mr. Norrell, Lady Pole lives half in real life and half in Lost Hope with The Gentleman and she really begins to lose her mind, but who could blame her. 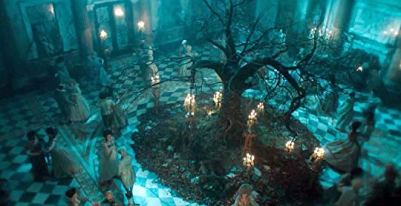 Lost Hope is through the King’s Roads on the other side of the mirror, or the rain. It is a fantastically dreary place where the ball never ends and everyone is at the mercy of The Gentleman. The Gentleman himself is a mysterious faerie who is only out to help himself. In the end, the only thing that can break him is the Nameless Slave, for not even The Raven King cares to get rid of him.

Another person to watch for in this show is Vinculus, played by Paul Kaye. He may seem to be just a crazy homeless man, but really listen to the things he says and it all can become clear. Don’t worry, if it doesn’t, the end of the season will be sure to clue you in. This show was based on a book of the same name by Susanna Clarke in 2006. Seeing as it only took until 2015 for it to have a series air, one would have hoped she would have written a sequel by now. Alas, no such luck and therefore no season 2 to this marvelous show. No matter, I still recommend you watch this when you have some free time as it will draw you into a magical world of love, war, and friendship.