Escaflowne is one of the most gorgeous animes I have had the pleasure of watching. The series also has an interesting story and cast of characters. This is probably why fans enjoy Escaflowne so immensely.

The Vision of Escaflowne, it’s original title, first aired in both Japan and America in 1996. The series has had Mandy different directors for various episodes. The series was originally released by Sunrise.  Escaflowne was then licensed by Bandai Entertainment for release in other regions. Currently Escaflowne is licensed by Funimation.

Hitomi is an ordinary high school student. She runs track, has friends and other interests. Though, in reality, Hitomi isn’t quite as ordinary as it would seem. She has psychic abilities. After having a vision of a battle she is transported to a magical land called Gaea. There is a war raging and Hitomi maybe able to help.

The soundtrack of Escaflowne is lovely. It helps set the mood for the story being told throughout the series. It also gives the viewer clues about different characters and situations. The soundtrack is also fantastic to listen to on its own.

The setting and character designs are really fantastic. The industrial, pastoral and modern settings are well animated as well as diverse. Each character has a different design. The costumes are a real treat to view throughout the length of the story. The battle scenes are also just really fantastic. Escaflowne treads the line between what most animes looked like in the mid-nineties and having a very distinct difference in animation. It really is a great anime to watch. 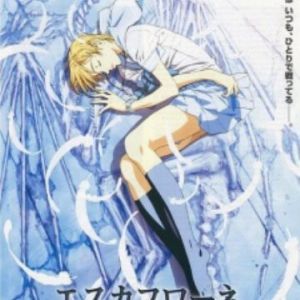 It is safe to say that I really enjoy Escaflowne. The series is a total package for any anime fans. Great soundtrack. Interesting story. Fascinating characters with a little bit of romance. It was an anime that I would rush to watch on television. It was also a favorite in my group of friends, the series has clearly inspired our styles of art and storytelling through the years.

I would really encourage giving Escaflowne a try if you haven’t seen it yet. There is also an interesting, and slightly more grim, movie version that came out in 2000.