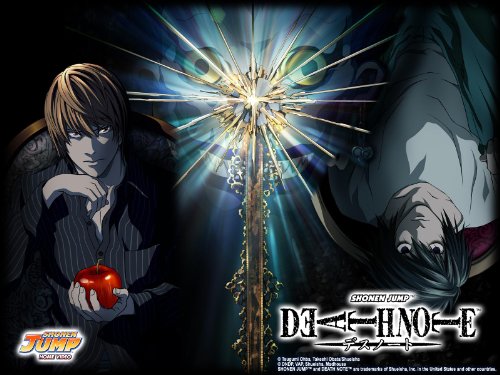 What would you do if you found a way to punish those who do wrong? What if it seemed simple but in reality it had some big consequences? What is the only way to do it resulted in a person’s death, would you still do it?

It is an interesting concept. Anime is a fantastic medium to explore such a question. It’s potential consequences. That is the aim of Death Note. To explore a world where such action could be taken by one person.

Like many other anime Death Note started off in book form, a manga,  written by Tsugumi Ohba and illustrated by Takeshi Obata. The manga was first published in Japan in 2003 the series became extremely popular. It is not surprising that by 2006 an anime form of the story was released. The anime did not disappoint and is a favorite among many fans. No doubt a factor in its popularity is the story itself.

Light is a high school student. He is extremely intelligent and seems to have the world opening up to him. There are just two problems. One is that he is bored beyond belief. The other, the world around him is dark and full of crime. One day Light finds a book with “Death Note” written on the cover. What Light doesn’t know is that the book was dropped by a rogue death god. After he discovers what the book really is he begins to use it to kill those who he deems as worthy of such a punishment.

This starts a series of events into motion. People are dying suddenly. International police are called in. Will Light stop? Will he be caught? Is he going to spin out of control? Will the Shinigami ever have enough apples?

Death Note has a great vibe. The whole anime is dark by design. There is almost a layer of grit on so many of the scenes. The character designs are just really interesting. The music is good and helps set the mood for scenes.

As previously stated there have been a few incarnations of the story of Death Note. First the manga, then the anime and most recently a live action series by Netflix. The last was met with more of a mixed reaction. That is to be expected with source material as loved as Death Note.

I would highly recommend the anime. It is a great anime for an older audience that enjoys a slightly darker story.