Musicals are very special to some people. They hold dreams and inspiration. A story told through the form of music and dance, who could ask for more? That being said Broadways has been problematic throughout its history. There are creators who are working hard to give fans more diverse stories and opportunities for actors who deserve some extra kudos. Here are ten of my favorite musicals.

Musicals mean different things to different people. I choose to spotlight these because they have all helped me through something or hold some really special memory, above are just a few examples. My mom loved Broadway and she kindly rewatched Cinderella with me dressed up as a princess. Rent, Wicked and Spring Awakening are a huge part of my transition into adulthood with my oldest friends. I remember saving up to see Wicked and just sitting there open mouthed after all that hard work, it was totally worth it. Hadestown helped me get through losing a family member to suicide.

These have been part of the soundtrack of my life. I hear a song and am back in the kitchen with my mom, in the car screaming lyrics with friends or crawling my way out of a dark place. I am lucky to have had music play such a big part of my life. The experience is indescribable, the energy just runs through you. Broadway is constantly evolving and I hope you will give one of these a try. If I didn’t have your favorite on the list then leave it in the comments below. 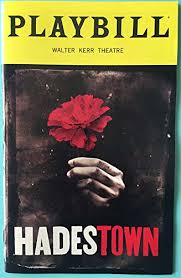 One thought on “Thia the Bard’s Top Ten Broadway Musicals”