Hiya folks! Rinshi here. I recently had the pleasure of interviewing the amazing Sev Cosplay for you guys. Sev recently took r/photoshopbattles and Kotaku Cosplay by storm with what has been dubbed his “Buff Magikarp” cosplay, and he is also probably the best damn Gamagori from Kill La Kill that you will ever see. Not to mention that he’s a very talented costumer in general with awe-inspiring attention to detail. So! Without further ado, on to the interview!

I became interested in cosplay after attending my first Otakon. I came without a costume and after seeing how much fun cosplay seemed to be, I got hooked!

What is the most important part of putting a costume together for you?

What is your favorite thing about cosplaying?

The great friends I’ve made through the hobby! I met the majority of my closest friends through cosplay.

What cosplay project has challenged you the most?

Definitely my Gamagori. It was the first project I tackled that really required a ton of crafting and foamwork. It would be a much easier costume to make now, but at the time it was incredibly difficult.

Which of your cosplay costumes are you the most proud of?

I’m really proud of all my costumes! But overall it would have to be Jet Black, just because he is such an under-represented character and I really feel like I did a good job on that one. 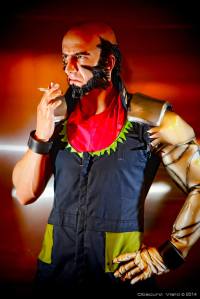 What is the best experience you’ve ever had while cosplaying?

Probably cosplaying KLK with Sister Cacao at Otakon last year. The looks on peoples’ faces as we passed by was great! Had a blast and got tons of great photos. But the best part was taking the costume off xD

Have you ever judged contests? If so, what qualities do you look for in other people’s cosplay costumes?

There is always controversy in any community, and cosplay is no exception. How do you feel about current attitudes in the cosplay community toward gender, body type, or race affecting a person’s costume?

Honestly, I think cosplay is just a silly hobby that people take way too seriously. In any community you’re going to have haters. Even I get ‘shamed’, to my face nonetheless, by jealous people claiming I do steroids (I don’t). Anyone who goes out of their way to hate on someone else undoubtedly hate also themselves, so I ignore and pity them. 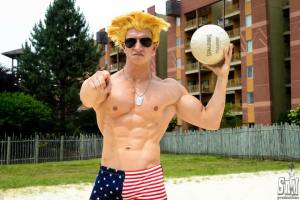 What are your views on genderswapping (changing a character’s established gender to a different gender) for cosplay? Is it something that you have done or would be interested in doing?

Not my cup of tea personally but cosplay is just for fun so people should do what makes them happy.

What are your opinions on Cosplay is Not Consent? Have you ever experienced harassment or bullying while in cosplay?

This is a funny one given the magikarp cosplay I just did. I can’t count how many times I had girls come up to me and go “can I touch your muscles/feel your abs”. It’s just weird man. But at least they have the decency to ask. I’ve also had people just come up to me and touch me, which is clearly not OK. I make it known that it’s not OK, and in the end it doesn’t end up really bothering me. In magikarp it was just extra bad I guess because I had my face covered so it was easier to objectify me.

No strong opinion either way. Even now, there are times where I seriously consider buying pieces of my costumes to save time. Like I’ve said, this hobby is just for fun. I personally have more fun by making my costumes.

What advice would you give to someone who is just starting out with cosplay?

Look online for lots of great tutorials! Learning basic sewing and foam crafting is all you need! It is cheap and will get you far. You don’t need expensive things like worbla.

I know that you are quite invested in health and fitness. What sort of relationship do you have between fitness and cosplay? Does cosplay help motivate you to live a healthy lifestyle?

Cosplay is definitely a motivator for fitness! I am sure I’d still be working out if not for cosplay, but it is that little extra motivation that helps push me to my limits. Not to mention anytime I do seriously bodybuilding preparation work (cutting down to low body fat percentages) it is specifically for a con xD

Do you have any advice for someone who is a beginner with fitness and nutrition?

Find a workout routine or exercise regime that works for you and is FUN. If you can’t adhere to it, it won’t work for you. There are a lot of lifting routines out there (such as 5×5 which is a great way to start). Try them until you find one you like and keeps you motivated. Or do something else entirely that will activate your muscles! Sports, gymnastics, crossfit etc. Just gotta find what you love and stick with it

For nutrition, I personally HIGHLY recommend what’s known as “flexible dieting” or “IIFYM (if it fits your macros)”. Look it up. Seriously, it changed my life. Even when I am deep in a cut and getting my body fat as low as possible, I still feel like I can eat out when I want and eat the foods I crave while knowing my body is getting the nutrition it needs. It is GREAT.

Since we focus a lot on gaming, onto some gaming questions! What was your first experience with gaming?

When I was about 5 years old I still remember the first time my parents got an NES and booted up Mario. Been gaming ever since!

Do you currently game?

If so, what system(s) do you prefer?

Right now I mostly play on the 3DS because I don’t have that much time at home to play. The ability to play on the go makes it my go-to system.

Definitely various RPGs over anything else. I like FPS too but usually only if there are RPG elements (like Borderlands). I need to be able to customize my character and make him my own!

What are you playing most at the moment?

I recently played through the latest Pokemon and am now hopelessly addicted to Monster Hunter 4 U (don’t be surprised if there is a cosplay from that soon).

KOTOR and Fallout 2 are my two top favorite games of all time. The Mass Effect series is up there as well.

Is there anything else you’d like to put out there for everyone who’s reading?

Be the best version of “you” that you can possibly be! 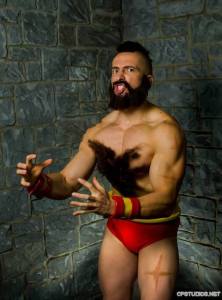 Zangief from the Street Fighter series, Photo by CF Studios

Wow! What an awesome guy. Many thanks to Sev Cosplay for taking the time for this interview! It’s been a real pleasure. I have to say, I totally endorse flexible dieting as well: MyFitnessPal FTW! It’s really helped me work some of my puff into tuff, lol! What an inspiration. In fact, after reading this interview I had to go do some high intensity interval training because I was just so pumped! 😀

That’s all for now. Hopefully we’ll get the chance to chat with Sev again sometime. In the meantime I’ll just have to continue to stalk- ahem, I mean follow his facebook page for whatever his next awesome project is. Until next time, gamers!

Lindsay Wells is a writer currently working on two novel projects. She has a short story published with Zelmer Pulp in the anthology Trumpocalypse, a series of what-if worst case scenarios. Her story, Walled In, takes a look at a potential post apocalyptic future through the lens of Lovecraftian horror. Her novel projects include a fantasy adventure romance that takes winter myths and turns them on their ear, and a collaborative steampunk adventure project that she started with her husband for NaNoWriMo 2017. View more posts

One thought on “Interview with Sev Cosplay”