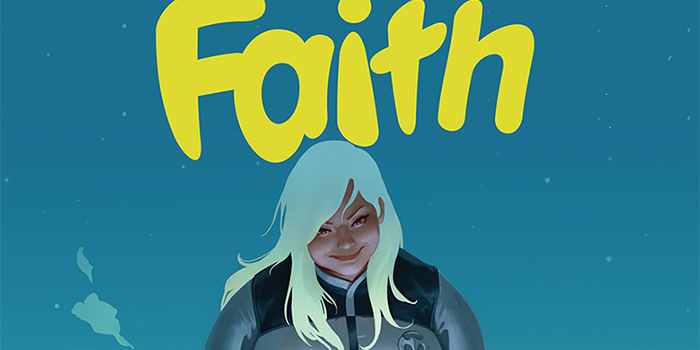 For those who aren’t aware, great superhero books aren’t published exclusively by Marvel and DC comics. There are a bevy of excellent options out there, just waiting for you to take a chance on them. Invincible, by The Walking Dead‘s Robert Kirkman comes to mind, as well as an excellent teen-hero book called Harbinger. It’s from the pages of the latter that a charming and enthusiastic hero soars to give us her first solo title: Faith.

First thing’s first. This is a super fun first issue put out by a company that has been putting out excellent superhero books for several years now, but has somehow flown under the radar. Faith is a infectiously excitable heroine who lost her parents at a young age and sought comfort in comics, sci-fi and other mainstays of geeky pop culture. She always wanted to be a superhero, and finally got her chance when she discovered that she was a Psiot (think Mutants from X-men).

She had a good run with The Renegades, the team of heroes from the Harbinger comic, but decided it was in her best interests to split from the team and go off on her own from the hubbub of L.A. She lives on her own and has a job blogging for an entertainment site. This issue is mostly set-up, getting to know our heroine and her new life on the West Coast, introducing us to her first solo villains, and then…a cliff-hanger ending. On it’s basest level, this is a hell of a fun start to a series that I plan on keeping up with. But let’s also talk about another level that this book works on…

When looking for change in a system, whether it be inclusion of different races, or genders, I often wonder, “is it better to ignore the issue, since it shouldn’t really have any bearing, or is it important to the conversation to acknowledge such things?” I was partially of the mind to do this review without ever mentioning the physicality of the main character, but I’m afraid that would do a disservice to what I think is a very important issue here: Faith is fat. The comic doesn’t mention it even once, but the reason I’m bringing it up here is that it seems like an important milestone in making comics more relatable for everyone. More people than ever before in the history of the medium can pick up a book and get an enjoyable experience that speaks to them. There have been so many conversations in my shop about how most women in comics have big chests, tiny wastes and can twist their bodies in physically impossible positions to show off all their assets. “But where are the women who look like real women?” You could go to Strangers in Paradise, Rachel Rising (both by Terry Moore) but those aren’t superhero books, and you could check out a story in Invincible where his GF Atom Eve gained a bunch of weight due to stress issues, but this is the first time that a woman of a heavier weight is the star of her own series, and that’s pretty f#$%ing important.

If you’re looking for excellent super-heroics looked at through a slightly different lens, check out FAITH. Make the leap.

JD can be found running his own comic shop in Manayunk, PA called Johnny Destructo’s HERO COMPLEX, hosting the PopTards Podcast, discussing movies, comics and other flimflam over at www.poptardsgo.com, and graphically designing/illustrating/inking and Booking his Face off at www.facebook.com/jaydotdeedot. Follow his twitter @poptardsgo.