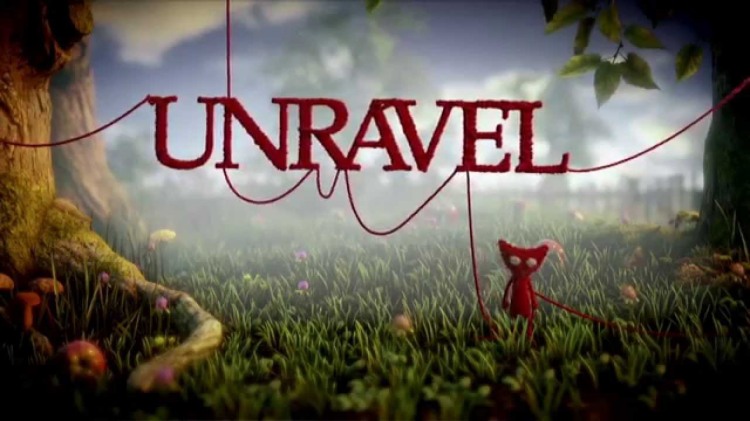 You know that I always say that I’m not good at puzzle games. Well, to be honest, that’s not entirely true. I’ve been playing puzzle games my whole life and, while I say I’m not good at them on camera when I get flustered, I can get through them fairly easily when I’m playing them on my own and I can take the time to figure it out. It’s just a matter of perspective. A puzzle-platformer game, Unravel has all the elements I love.

What’s it about?
Unravel follows a small humanoid creature named Yarny. Yarny is, as you can guess, made out of yarn. As you move, Yarny unravels, so you have to find all the clever places where yarn is stashed so he can remake himself. As Yarny, you move through different puzzles and obstacles in search of memories and small crocheted (or knit – it doesn’t specify and I don’t know enough to figure it out myself) animal-shaped pieces that his owner has lost during significant times in her life.

What did I think?
This game is incredibly moving and absolutely beautiful. The storyline takes the whole game to reveal itself, but it’s so worth it. The storytelling aspect of Unravel is so beautifully done that you find yourself caring deeply for Yarny and his owner and her family. I cared about Yarny so much that I actually jumped or screamed during parts when the environment tried to attack him. It’s powerful, to say the least.

The graphics are amazing. Yarny is simple enough, but you can really see him getting smaller and smaller the more he moves around. The details are incredible. He’s also surrounded by this gorgeous scenery, whether it’s a beautiful bumbling brook in the backyard, a snowy vacation or a terrifyingly real lighting storm.

The controls are easy to master and Yarny is very responsive. I’ve been playing on my PS4 and I’ve found that I very rarely yell at my screen, “Jump when I say JUMP!” (If you’ve been watching my Ori and the Blind Forest series, then you know I say that a lot). The gameplay is smooth and even relaxing, except when you’re in an area that’s super stressful… like when you’re trying not to get snatched up by birds in an open field.

Some puzzles are more complex than others and I wouldn’t say that they get any harder as the game goes on. There are 12 puzzles in all and once you get the hang of it and learn the game, they’re actually pretty quick to figure out. That doesn’t make them any less brilliant or the game any less challenging. There are little tricks and tips you really have to master in order to finish some of them.

The replayability in the game is low. Once you go through a level, you basically can just go through it again with no changes. There are little secrets in each level that could be fun to go back and explore; however, you’re really only going to get one play through out of the game – unless you’re a completionist.

Do I recommend it?
Yes, I do. It’s become one of my favorite games to play when it’s been a long day. It helps me unwind and I just can’t get enough of it. I highly recommend it. You can find it on Origin, Xbox One and PlayStation 4 for $19.99.