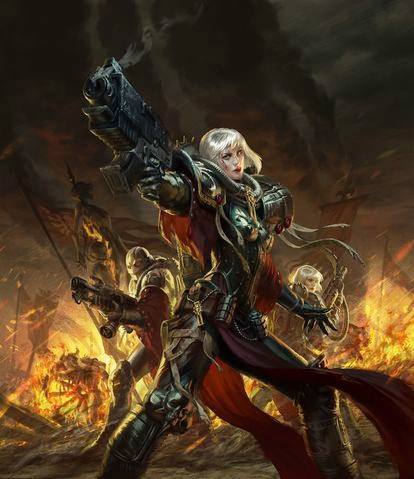 British Minis game manufacturer Games Workshop is garnering negative headlines this month as the result of a suit filed against the company in Florida by a livid game store owner. The suit filed by David Moore alleges violations of the U.S. regulations and the RICO act including but not limited to Fraud, Price Fixing, Breach of Contract, Unjust Enrichment, Restraint of Trade, Conspiracy and Antitrust Violations. Some of the major issues of contention for Moore seem to be:

– limitation of online sale (retails previously could not sell figures online and had to direct customers directly to GW for online sales) and increase of highly lucrative online exclusives not available in stores
– intellectual property theft including the name Space Marines (Moore alleges this theft was from Robert Heinlein, though the name had been used previously by Bob Olsen in a 1936s novella for Amazing Stories ), character design from FASA’s BattleTech, and Aliens design (R. Geiger)
– discontinuing Warhammer Fantasy Battle
– refusal to accept returns despite written statements to the contrary.

Moore is asking for 62.5 million dollars total in damages to be divided between himself and other affected stores as well as divesting GW of their intellectual property and trademark claims and changing the way the distribute product through their own stores.

The short, simple answer is that this suit will likely go nowhere. While perhaps breach of contract might be a legitimate issue, Mr. Moore’s wild volley of accusations range from misunderstanding IP law and RICO to being intentionally misleading regarding pricing and online sales. Also, there is some amount of irony that he dedicates at least a paragraph of his complaint professing to be only interested in upholding “a Free Enterprise & Free Market system of law” but then objecting to the company selling a product at a valuation that the market seems to be willing to bear. (And before you label Morris a miniatures-game playing Robin Hood you should know that in addition to receiving 20% of the proposed damages award, he asking that all copyrights and trademarks that Games Workshop currently owns to be conveyed to himself as well.)

All that being said, what seems to make Games Workshop the evil cackling villain of game manufacturers? When the suit originally made it into the news a forum thread on Board Game Geek veered back and forth from information on the suit to a list of grievances regarding GW. Posters left messages that read “…we all like to see GW get a bit of a kicking…”, “…GW, the company that’s reviled even by their own fans…” and “Even if they lost this crazy lawsuit, all they’d have to do to recoup costs is start making their models out of regular old clay, claim that it’s a highly-advanced space-age clay polymer, charge double for it because of that…” There’s been a good deal of negative press about GW and other stories seem to have more evidence to back their complaints.

For starters, there are several documented cases of what some call trademark bullying – in particular over the term “space marines” (which, as noted above, wasn’t created by Games Workshop.) The subject of a cease and desist who had novels featuring the term pulled from Amazon  stated “I used to own a registered trademark. I understand the legal obligations of trademark holders to protect their IP. A Games Workshop trademark of the term “Adeptus Astartes” is completely understandable. But they’ve chosen instead to co-opt the legacy of science fiction writers who laid the groundwork for their success. Even more than I want to save Spots the Space Marine, I want someone to save all space marines for the genre I grew up reading. ”

Many cite Game’s Workshop’s almost non-existent customer service as another reason they dislike the company.  Richard Beddard attended a general meeting of investors in 2015. “I’ve got bad news for disenchanted gamers complaining on the Internet. The company’s attitude towards customers is as clinical as its attitude towards staff. If you don’t like what it’s selling. You’re not a customer. The company believes only a fraction of the population are potential hobbyists, and it’s not interested in the others.” There are literally dozens of threads on BGG, The Escapist, and Reddit complaining of unanswered complaints, queries met with indifference and hostility, and bait-and-switch-like tactics on the online store.

Will any this matter to Games Workshop? Its hard to say. 2015 was a challenging year for the company financially but profits almost doubled in 2016. Releasing online sales to outside stores seems to have created some goodwill between the distributor and its retailers. On the other hand, newer, less expensive minis games like Xwing are continuing to nab a larger section of the market each year.  After 40 years this phoenix seems to rise from its own ashes with regularity – we’ll see what the next decade has in store for it.