RSS Feed
← Are Consoles Chasing Gamers Back to PC?
Games to Get Excited About: July 2016 → 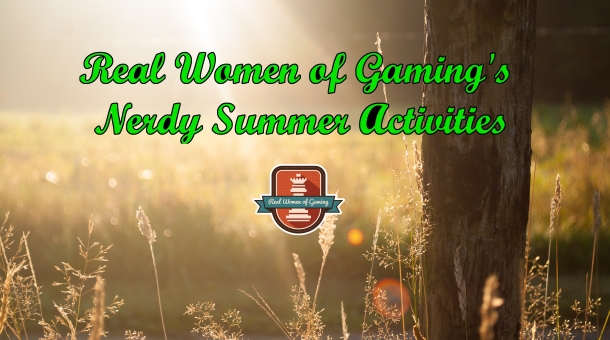 Summer is a great time to get stuff done, don’t you think? For those in school, you have summer break. For those whose school days are behind them, summer translates to outdoor barbecues and vacations to the beach.

For the Real Women of Gaming staff, summer means nerdy activities (just like the rest of the year). Read about them here!

“Since I am missing out on, what feels like, every convention ever, I am hoping to at least make the Ren Fair this year with Lily. There was a time in which I wouldn’t be caught dead not attending and now I find myself missing it too often. I adore it so and even have my own garb. They are amazing.” ~Crymson Pleasure~

“I don’t know that I do anything specific during summer months that I don’t do during other seasons. But, currently living in LA, I can say that it’s certainly easier to lay on the beach and read horror books to my heart’s content in summer. Other than that, it’s just video games and writing as per usual.” -Vanri the Rogue

“I, too, seem to be missing out on all the cons. I am also really looking forward to Renaissance Fairs. I love dressing up in my garb and just having a lot of fun for a day.
I also look forward to a Harry Potter program that I run every year for kids at the library I work at. Every year we have a new theme and it is one of the last programs we have for the Summer Reading Club. It is a bit stressful since, as the Gryffindor on staff, I keep trying to make it bigger every year. It is always worth it during the program when the kids are having so much fun!” -Thia the Bard

“Streaming is my summer activity. Working on my bot, schedule and networking. Other then that will be chilling with the family.” -KinkedNitemare-

“Already did Comic con, and a friend invited me to go to Gencon with him this year. Still deciding on that one, though it is soooo tempting.” -Fluffy the Necromancer

“Conventions. We have a local gaming convention I hit last weekend called Fog Con. This Saturday is ACE which is an artist and comic expo, and in August we have GenCon which is going to be incredible this year.” -Trever

“My family and I had planned on attending the 2016 Cherry Springs Star Party, but had to cancel. Cherry Springs State park has virtually no light pollution due to its location. As such, during a new moon it is a prime stargazing spot. We may make another attempt during the next new moon.” -MaxUrso

“Nothing really until DragonCon to close out the summer on Labor Day Weekend. For financial and scheduling reasons we had to severely limit our convention schedule, but DragonCon is too amazing to miss so we’re making that our one big con for the year.” ~Rinshi

What’s your favorite summer nerdy activity? Let us know in the comments below!

Hey guys! I'm Vanri. Vanri the Rogue. I enjoy all types of games. I grew up with NES, SNES, N64, Playstation and a Virtual Boy in my house. I love RPGs mainly, but I will always be up for trying new games. My favorites include the Fable series, Final Fantasy, Dungeons & Dragons, Betrayal at House on the Hill and so many more.
View all posts by Vanri The Rogue »
← Are Consoles Chasing Gamers Back to PC?
Games to Get Excited About: July 2016 →