Welcome to the July Free Game spotlight! This month we’re talking about Poke– wait, we’re not talking about Pokemon Go? No we’re not. If ever in the history of games there was something that didn’t need a spotlight, it’s Pokemon Go. No, this month’s game is Magic the Gathering Puzzle Quest.

First thing’s first, Magic the Gathering Puzzle Quest is a free-to-play game. It’s a free download with options for micro-transactions. Most of the micro-transactions require the game’s premium currency, but some exclusive cards or characters can only be purchased with real money. It’s got daily rewards, event rewards, and PvP ranking rewards to keep you coming back in the hopes of convincing you to open your wallet. If you’ve played any free-to-play game since Farmville, you know what to expect. That being said, the game is worth trying for two reasons. First: the game respects your time. Micro-transactions are available, but aren’t necessary to engage with the game and get a real sense of progress. Second: the game is fun to play.

The Puzzle Quest series began back in March of 2007 as the first successful attempt to take the match three gameplay of Bejeweled and match it up with RPG combat and character progression. It was a surprising two-great-tastes-that-taste-great-together moment and has inspired a whole sub-genre of puzzle RPGs. The first game was a modest hit but its more ambitious sequel failed to find an audience. Puzzle Quest 2 languished on various app stores for several years before publisher, D3, quietly made the game to free-to-play. Since then, D3 has used the basic match three plus combat gameplay as a platform for licensed properties like Adventure Time, Marvel, and, most recently, Magic the Gathering. While the previous licences were odd fits for the formula, Magic the Gathering gets the game back to the strengths that made the first game such a surprise and also provides its own welcome twist.

The game screen for MtG Puzzle Quest includes elements that will be immediately familiar to veterans of both Magic the Gathering and Puzzle Quest. Players take on the role of a Planeswalker, build a deck of ten cards based on the mana color of that Planeswalker, then do battle by matching mana symbols on a grid. In past games, matching gems allowed you to direct damage to your opponent or to cache power for special abilities. In this game, gems give you mana to summon cards from your deck and you can rearrange the cards in your hand to determine the order you want to play them in. Cards can include creatures that attack your opponent or defend you with special abilities, sorcery cards which remain in effect until destroyed, or single use spells which take immediate effect and then vanish. 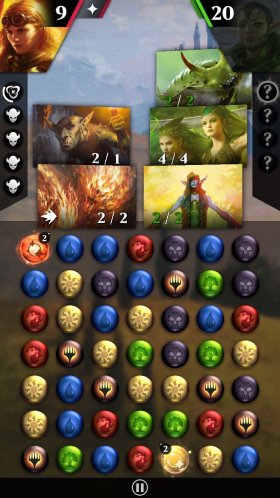 A lot of the game’s fun comes from tweaking your decks as you slowly gain more cards from daily unlocks and ladder rewards in PVP. Of course, Rare and Mythic cards can give the most obvious benefit, but even more common cards can be synergized in surprising and effective ways. This is the part of the game that best lives up to Magic the Gathering. Having the right cards is only important if you can find the right way to use them.

The game has a story mode that offers a decent ramp in difficulty. The story mode is surprisingly generous with the game’s premium currency and it can be tempting to spend it all on booster packs right away. My advice is to hold off. The game only gives you one Planeswalker to start, which means you’ll only be able to play with one color of card. If you like the game and want to keep playing, make sure to buy a Planeswalker of each of the main colors so you can give yourself the most options for deck building and find the playstyle that works for you.

Aside from the Story Mode, there is Quick Battle and Events. Quick Battle is the game’s only PvP mode. In it, you will face off against AI controlled decks created by random other opponents playing in the ranked mode. Winning earns you XP to level up your Planeswalker and points to advance you up the ranking. Losing gives you a token amount of XP but doesn’t penalize you. One of the coolest things about this ranked mode is that the ladder resets every couple of days. This means that rewards are frequent and you never get the feeling that you are wasting your time because the top ranks are thousands of points beyond what a non-obsessive player could possibly earn.

Events are more irregular. There have only been a couple and they have each featured a slate of battles which get progressively more difficult. The Events can be brutal, even to the point of feeling unfair, but they push you to scour your collection for the cards that you can use to counter that ability, or negate that creature, anything to give you an edge. So far, Events have been where the challenge of the game has truly shone.

So now, the million dollar question. How much money do I need to spend on this game? None. So far, I’ve been playing for about three months and I haven’t spent a cent. I have each of the basic Planeswalkers, I’ve managed to place in the top 100 several times in Quick Battle, and I’ve come within two battles of beating the latest event. The game gives free cards up to three times a day on top of log in rewards of crystals, XP, and, you guessed it, more cards. The game does have timers: once you finish a battle it takes time for your Planeswalker to heal, but I’ve never once had to stop playing because none of my characters could go on. While one Planeswalker is healing, I can switch to another fresh character, ready to do battle. I’ve never felt like I’ve run into a challenge in the game that could only be solved by throwing money at it. Sure, you’re not going to able to take on the top players without building a deck of Mythic cards and special buy Planeswalkers, but you will definitely be able to enjoy the game and feel like you are making progress without it. Honestly, the fact that I have gotten so much out of the game without needing to spend money on it has made me more tempted to actually do so.

In conclusion, with the merging of Puzzle Quest’s match three mechanics and Magic’s rich variety to tactical play, the Puzzle Quest franchise finally has something new to offer in the sub-genre that it pretty much invented almost ten years ago. Fans of puzzle games should be able to get a lot of enjoyment out of the moment to moment gameplay and fans of Magic the Gathering will likely appreciate the game’s attention to detail, breadth of tactical options, and clever usage of cards from recent releases of the tabletop game.

Lindsay Wells is a writer currently working on two novel projects. She has a short story published with Zelmer Pulp in the anthology Trumpocalypse, a series of what-if worst case scenarios. Her story, Walled In, takes a look at a potential post apocalyptic future through the lens of Lovecraftian horror. Her novel projects include a fantasy adventure romance that takes winter myths and turns them on their ear, and a collaborative steampunk adventure project that she started with her husband for NaNoWriMo 2017. View more posts