Princess Peach is yet one more character that started out as a damsel-in-distress and has evolved into something much more. It is true that Peach has spent a lot of time locked up in the evil Bowser’s castle, waiting for Mario to save her. Nowadays, Peach tends to fight and race for herself. She does it in her signature color of pink and sometimes she even uses a parasol! 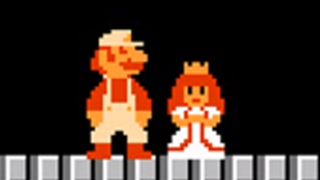 Peach first appeared in 1985 in the game Super Mario Brothers. She is a princess of the Toadstool kingdom and is often kidnapped in the earlier games which, I think, has given her a bad rep in the gaming world. As I have written about before, we seem to have this unfortunate trend that if a character is not always a fighter that they are unworthy in the eyes of the gaming community, and honestly, the greater world. Even though she has been featured more recently as a playable character, Peach seems to be undervalued by players, which is a shame.

Some of my earliest gaming memories with my mom are of trying to fight my way through these old maps to save Peach. My mom, my brother and I spent a lot of time playing those games. I never minded that we had to save Peach. I was mad that the security of her kingdom seemed to be so lax that Bowser kept taking her and that the best person to save her was a plumber and his brother. However, that could have just been my young mind overthinking the games. At the end of the day, I always liked Peach.

Part of it might have been that she was a princess. Part of that was because when she first became a playable character, she was originally the only female character to play. I always play her in Mario Kart with my friends. I like it when I have a rare win and I get to wave past in a blur of pink and sparkles.

I like that Peach has been allowed to evolve. She is still a princess. She is still “girly” in her design and mannerisms. However, now she gets to race and fight for herself. Peach has even gotten to go rescue the boys in Super Princess Peach! In a great switch, it is Mario and Luigi who are kidnapped and Peach who must save them.

Peach can also be played in Super Smash Bros. Melee and Brawl, Super Mario RPG, and Super Paper Mario. Peach also appears in numerous Mario-themed sports games. She is a playable character in many of the Wii games, such as Super Smash Brawl, and even has her own remote now. Yes, it is awesome and, yes, I want one despite being terrible at Wii games.

In short, Peach is a fun character to play. She has a rich history in the world of gaming. Her design has never been compromised while she has been given room to change over the years. Sometimes you just need to play a pretty princess, particularly one who can beat people up with accessories if she so chooses.