RSS Feed
← The Flip-side of the Harassment Coin: Being Too Eager
Indie Developer Spotlight: Splitmind →

Games, like people, come in a wide variety of shapes, colors, origins, and places.  You have console games, PC games, mobile games, handheld games, tabletop games, browser games and even LARPs.  So anyone that wants to play a game can find one that fits them. And everyone has their own preference.

Today’s top 10 list only touches on the vast array of games that are available in your favorite browser.  There are many gamers who don’t consider browser games to be worth the consideration.  But you simply have to give it a chance and you can find one that will suck hours of your life away as you play.  Sure, they might be simpler than other games.  But that doesn’t make some of them any less involved and engaging.  Or any less a game.

Note:  Some of these games are also available in other formats, like mobile.  But this list isn’t about that.  So if you wanna know more, go visit their site and find out!

Take the premise of Agar.io.  And smash it together with the classic game Snake.  There you have Slither.io in a nutshell. And man, is this game fun!  You are a snake and it is your job to go around and swallow bits of colored light orbs so you can grow bigger.  All while avoiding ramming your head into another worm which will kill you and make your body into little bits of colored light orbs for other snakes to eat so they can grow bigger!  It’s a jungle out there, man.

This game has taken more than it’s fair share of my idle time, I swear! A Dark Room is a seemingly simple text-based game that starts with a single decision to light a fire.  From there you build a village and explore the area till you find a better place to be.  This is a game that continues to advance even when you aren’t paying attention to it.  You can restart it, or even save your game data so you can move it to another computer and not have to start all over!  Try it out.  But only if you have a need for a time suck.  Seriously.

Have you ever played Cards Against Humanity?  There is a made up 90% chance that you have.  But if you haven’t… did you like it under your rock?  This game is hilarious and is made much more hilarious when playing with drunk people or with people who have never had their minds twisted… I mean, played it before.

Pretend You’re Xyzzy is the unofficial online version of Cards Against Humanity.  The layout is rather cramped and rudimentary and the chat could use some enhancements.  But when it comes to the act of playing Cards Against Humanity against people online anytime you want, this game is great!

I am not responsible for any corruption that you may or may not suffer from trying this game.  Fair warning.

This game has been around forever.  30 years is forever.  It’s undergone a few iterations of course, obviously it has been updated as technology grows.  But in its essence it’s the same game.  You really just have to experience it.  One could say that it doesn’t really belong on a Top 10 list because of it’s age.  But to them I say… “Time is an illusion.  Lunchtime doubly so.” 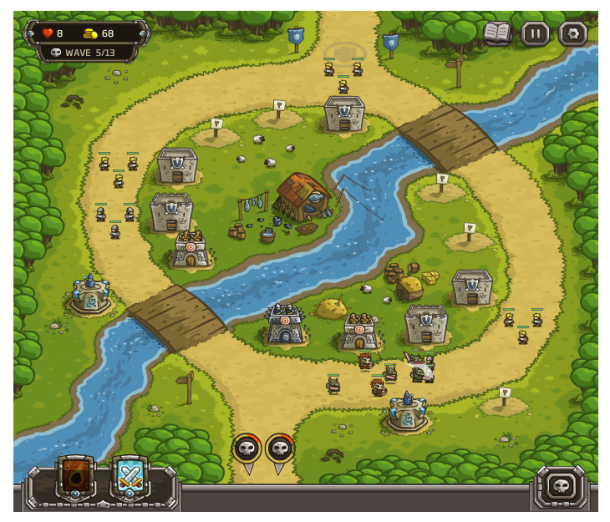 There are a certain sect of people who love Tower Defense games.  And these people are awesome.  Kingdom Rush is one of the better Tower Defense games I have played… and I have played a LOT of TD games.  Like all TD games, you have to protect the exit (or objects) from a horde of bad guys coming from one or several entry points on the map.  You do this by building different types of towers along the path to shoot the bad guys as they go by.  Some TD games allow you to place towers where you want within certain areas.  This game does force you to build only in the spots it tells you.  But meh.  It’s pretty.

Why is this game on this list?  It makes no sense.  But once I started playing it, I couldn’t stop.  It became a challenge to try and open all the boxes, come hell or high water.  Sure, it’s not the most involved of games.  But if you have this little tick that makes you need to finish even the littlest of tasks, this one will stick with you.

You get dropped off somewhere on the world in Google Earth.  And using no signs and only topography and landmarks, you have to try and identify where you are.  Not only that, you are then supposed to place a pin in where you think you are, and the game calculates how much distance is between your pin and where the game actually put you.  Get as close in distance as you can.

It really doesn’t get easier than that.  Except… you know… when you guess somewhere in Utah because you think you saw part of a plate on a car that looked familiar, only to find out you were actually looking at somewhere in England.

There are people that would revolt if Runescape didn’t get put on a Top 10 list.  The game has been around a while.  And it has its rabid fans who play it still.  It’s an in-browser fantasy MMORPG (massively multi-player online roleplay game.  Holy hell that’s a mouthful).  It has undergone some recent updates to graphics, so looks prettier than before.  If you like RPG’s but don’t want to invest time into Skyrim (heathen), then this might be for you.  Maybe. 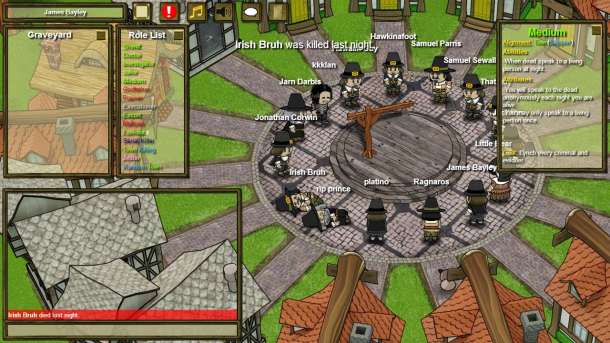 A game played with 7-15 people this game of murder and mystery is simple but surprisingly fun.  When you start, players are separated into 3 different groups.  Town members are the good guys.  They try to find the bad guys.  The Mafia are the bad guys.  They try not to get caught.  And they kill people.  And Neutrals… well, they are in it for themselves.  Each type has a role but only one group can win the game.

I am an old school on consoles and tabletop. I cut my teeth on my Atari 2600, graduated to the NES then to the SNES. N64 got some play. And then Final Fantasy on Playstation hit my life and OH MY GAWD. I love me some roleplaying games. And I utterly suck at first person shooters. Not even a little. And no, that is not an exaggeration. BUT I WILL BEAT YOUR ASS IN TETRIS, BUDDY! If you look at my Steam or XBOX live profile, you won't see much experience and time spent. I am fairly new to the whole online/multiplayer type of games, preferring my games offline and alone. I find myself playing Minecraft more and more. Not entirely sure why, but I am obsessed with it. I don't even really do anything in it, that's the odd thing! And now I have started Neverwinter. I like that it's free. Well, more like freemium. But I play it!
View all posts by -chritter »
← The Flip-side of the Harassment Coin: Being Too Eager
Indie Developer Spotlight: Splitmind →