November is an odd month. For some people it is a month of abundance. Of food and fun times with family. For some the prospect of family get togethers are not an option or worse. Wherever you land on that spectrum, here are some games to discuss or play this month. 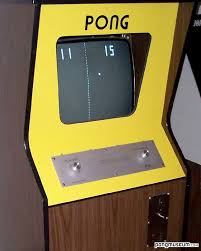 In 1972 Atari released the first commercial video game. Pong revolutionized video games. It was like playing table tennis in an arcade. The player uses the buttons to keep the ball moving back and forth to score points.

Alien Carnage was released worldwide in 1993 for DOS. It is a cartoon style game. The player is trying to stop aliens from taking over the planet. The player uses various weapons, including a flamethrower, which the player can purchase. The player is also able to free hostages along the way.

This one lead to the game that has become a favorite for some of the staff here at Real Women of Gaming. Warcraft was released by Blizzard Entertainment in 1994. The first game was a real time strategy game where players would control their army. Warcraft has inspired multiple games, books, trading cards and a whole horde (haha, get it?) of other merchandise.

Baldur’s Gate was released in 1998. It is a role playing game set in the Forgotten Realms. That’s right Dungeons and Dragons. Baldur’s Gate was very well received with gamers. It is even credited with helping to revitalize computer role playing due to its popularity. It has also had many expansions for players to choose from.

In 2011, The Elder Scrolls V: Skyrim  was released. Not surprisingly with this series, Skyrim was hugely popular. It sold in the millions. It is a game with a playable character who is trying to destroy a dragon who is prophesied to destroy the world. The character improves their skills by completing quests to get to their ultimate goal.

Whew. There were a lot of big names released in Novembers past. Hopefully I gave you some dinner conversation. Even better, I have given you something to play this month.

In the spirit of gratitude, I would just like to thank you, my friends and readers. Thank you for all the views you have given us. Thanks for sticking with me this year while I found great games for us to remember. Thanks for just being amazing. I, and the rest of the staff, are just so grateful for all of you.

2 thoughts on “This Month in Gaming History November”