Happy New Year and welcome to the first installment of Games to Get Excited About for 2017! Later in the article we’ll take a look at some of the exciting games coming out in January (including last month’s featured title Gravity Rush 2) but first we’re going to look a little further out for our spotlight title.

Fallen Legion is an upcoming action RPG from developer Mintsphere. At first glance Fallen Legion calls to mind the works of Vanillaware with its rich color palette and hand drawn art style. In practice, however, the game has more in common with the classic Valkyrie Profile series while adding new wrinkles of its own. Fallen Legion puts players in the role of a Princess who has recently assumed the throne of an empire on the verge of collapse.

In each level, the Princess will be joined by three other party members and each character is mapped to a face button. The party will proceed through levels automatically, stopping to enter battle as they encounter enemies. Once in combat, players will queue up attacks for each character to build combos and exploit openings in their enemies’ defenses while managing their actions to block and counter the enemies’ own attacks. Players will also have access to spells and special moves to add variety and strategy to the battles as they make their way through the game’s levels. 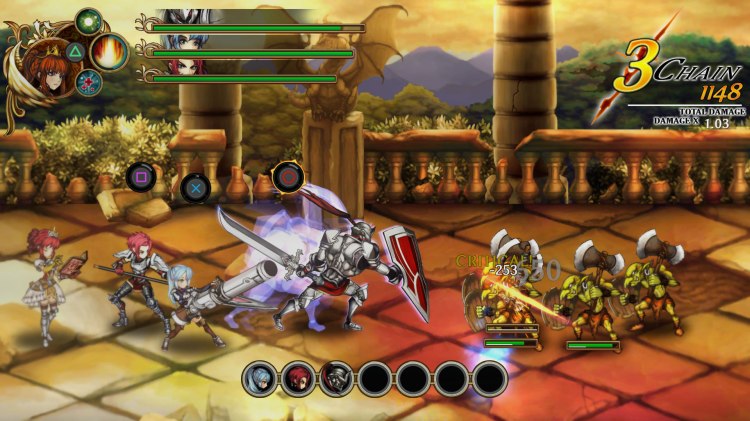 The battles are only half of what makes Fallen Legion interesting. During levels, players will be asked to make decisions that will affect both the story and the play of the current level. The choices will ask players to balance short term buffs with the long term health of their Empire and can affect available characters, faction allegiances, and even the loyalty of their characters. Each decision only gives the players 10 seconds to decide and the results are permanent.

As a fan of the Valkyrie Profile games, I am very excited to see a new iteration on the style of RPG, and I also love games that ask me to make hard choices and live with the consequences. Hopefully this game will strike the balance between exciting, challenging combat and tense strategic decision making. I’m also a huge fan of the art style and I’m always happy to see new games with hand drawn art. Hopefully this game will be worth the wait when it launches later this year.

A note on versions:

Fallen Legion is currently slated for release on the PS4 and PS Vita. Mistsphere has confirmed that the Vita version will not be a simple port but will instead tell a unique story from the perspective of another character fighting for control of the Empire and will feature its own story scenarios and encounters. Both versions are slated for digital release sometime in 2017. Limited Run Games has confirmed that they will be offering a physical version of both the PS4 and PS Vita versions.

Normally January is pretty dead in the water as far as releases go, but a number of high profile Japanese games will be coming out this month in the US.

Resident Evil 7 –  Capcom’s venerable survival horror franchise returns this month with Resident Evil 7. For the past few years the franchise has become overloaded with spin-offs, ports, and and inconsistent main-line entries that have leaned more and more on action mechanics instead of horror. Resident Evil 7 aims to return the series to its roots by focusing on more atmospheric dread and claustrophobic environments.

Fate/Extella: The Umbral Star – The Fate/ series began over a decade ago as a visual novel and now encompasses over a half-dozen anime series and movies as well as visual novel sequels, prequels, and spin-off stories. It has also been spun into a number of RPGs and other games. Fate/Extella is a spin off in the Fate/Extra series and will be the first action game in the meta-series. Extella will allow players to choose from 16 characters including series favorites and new faces in the next iteration of the Holy Grail War. The new game will feature gameplay inspired by the long running Dynasty Warriors series and its many spin offs.

Tales of Berseria – The next installment of the Tales of series comes to America this January. Tales of Berseria switches things up by removing the multiple party members of the previous games to focus on a single heroine in intense action-RPG battles. The Tales of series is well known for its anime inspired visuals and deep game play. Hopefully this next installment will prove worthy of its lineage.

Michael Wells is a 31 year old Business Analyst and writer. He writes fiction, runs table top RPGs, plays board games and video games, is a fan of movies, and is always behind on your favorite tv shows. View more posts