Written by: Julie from Eye4Games

Rise of the Robotariat launched at the end of June on Kickstarter. Its campaign ends July 22.

About the game
Rise of the Robotariat is a board game for 3-5 players that can be played as fully-cooperative or mostly-cooperative. You take on the role of one of eight unique robot revolutionaries and work together with other players to overthrow the humans who have oppressed you for too long.

In order to win, you must raise enough funds to launch a successful revolution — and do it within six rounds, otherwise the humans catch on and stamp it out.

During the game, you move between and activate city locations. At each location, you can do a different thing, for example, draw and play Upgrade and Sabotage cards, place propaganda posters, or influence the movement of Non-Player Characters. 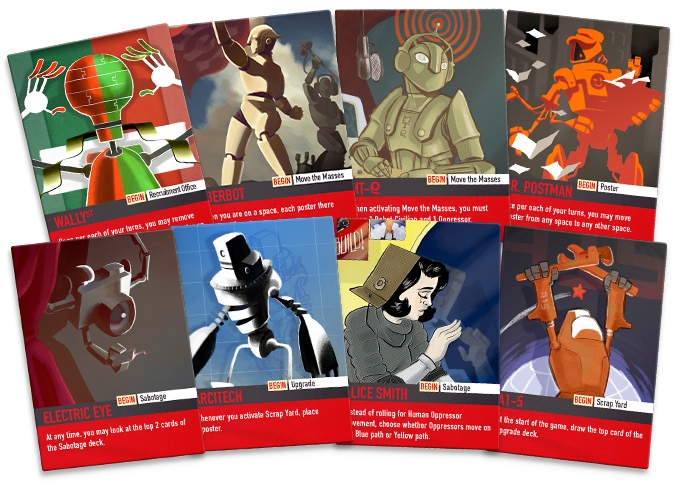 There are two kinds of Non-Player Characters (NPCs) moving around the board. These are either helpful Civilian Robots, who will donate to the revolution, or dangerous Human Oppressors, who will fine you and tear down your posters. At the end of each player’s turn, they roll dice to determine where the Civilian Robots and Human Oppressors will move next. Their path is mostly predictable but not guaranteed. The game’s intensity ramps up as the game goes on and more NPCs enter the board

A lot of the game’s strategy revolves around setting up turns where the Civilian Robots will give big benefits while mitigating the effectiveness of the Human Oppressors when the NPC dice are rolled.

You have one other thing to manage as well: the revolution’s reputation. You start the game with a certain amount of collective Reputation. You can chose to spend it to take bolder acts of sabotage and you will lose some if humans catch you conspiring too blatantly. But if Reputation ever drops to zero, robots lose all faith in the revolution and you lose the game.

If you decide you want an extra challenge or if someone is telling everyone else how to play, you can add in Secret Objective cards for a mostly-cooperative game. In this version each player is striving to achieve a unique goal. This usually involves making the revolution happen in the way that makes you look the most heroic.

The inspiration
Rise of the Robotariat started with a mechanic that no longer exists in the game. One of our game designers had an idea that sounded to a lot like upgrading robots and that lead to the flavor that players are members of the robot rebellion. After a disappointing playtesting, we scrapped the original gameplay idea, but the story it inspired shaped the development of new mechanics.

This is one of the exciting aspects of Rise of the Robotariat: all of the gameplay is grounded in the flavor and the story is infused throughout. For a small example, we have a character named Alice who looks human, but is certain she’s just a very cleverly disguised robot. Because of her appearance, she has more influence with humans and her character’s ability gives her the greatest control over the movement of Human Oppressor NPCs. 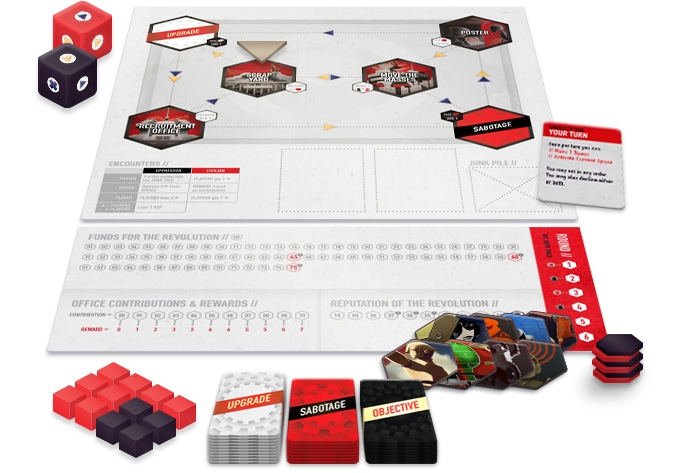 We’ve made a point to have the flavor color the rulebook, and the art for many of the characters references Soviet-era propaganda posters or revolutionary paintings. The predominant use of red in the games’ color scheme also is to invoke that revolutionary vibe.

As a cool extra, our writer has been writing on-going tales about the characters’ backstories leading up to the start of the game. We’re collecting them into a book and you can read them in blog-post form online here.

When’s it out?
The way to get the game is to back the game on Kickstarter. At the end of June, we launched a campaign for Rise of the Robotariat that runs until July 22nd. If we’re successful, we’ll be able to afford a print run and the game will be out by January 2017.