On July 4th, while many Americans celebrated with Fireworks and cookouts, my friends and I sat down to play Bears Vs Babies. As fans of the creators, we had been waiting to play it since the game had been announced. We were not disappointed.

Bears Vs Babies is honestly just a very entertaining game. It is also fairly easy once the players get started. There is a mat, and cards that are shuffled together. Some are babies who have different slots on the mat. There are some cards to give the players different actions. The other cards are pieces to help the player make a totally awesome monster!

The game encourages players to first go through a practice round, which is always helpful, depending on the experience level of the players. After they are comfortable, then it is time to get down to business and make some monsters. Players are given a number of cards. All babies are discarded face down on their appropriate color slots. Monsters are put together during each player’s turn. 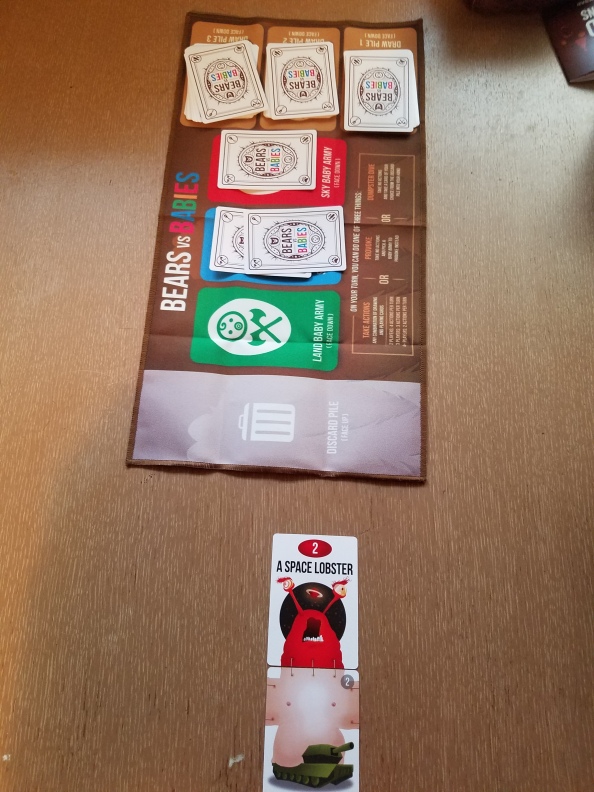 The tricky part is that the cards have to line up with the stitches so it may take a few turns before a monster can be properly assembled. There are points on the cards which let you know how powerful each card is, so the more cards the more powerful your monster. All of the cards with the heads have a color that correlates with a baby pile, or they have a rainbow meaning they could fight any group. The goal of the players is to defeat the evil baby armies. If the player can, then they get the points. Some cards in the deck enable other players to trigger a fight between a player of their choice and the baby armies so it is a good idea to pay attention to what your friends are building.

Bears Vs Babies is brought to us by the brilliant minds of Elan Lee and Matthew Inman. Yes, the creators of Exploding Kittens. Bears Vs Babies has all of the humor of Exploding Kittens. It felt quick to play between trying to make my monster and strategizing against my friends. The art on the cards is well done. The monsters are funny and sometimes even fancy. In short, it was a great game that I cannot wait to play again.

I would rate Bears Vs Babies: Must play.