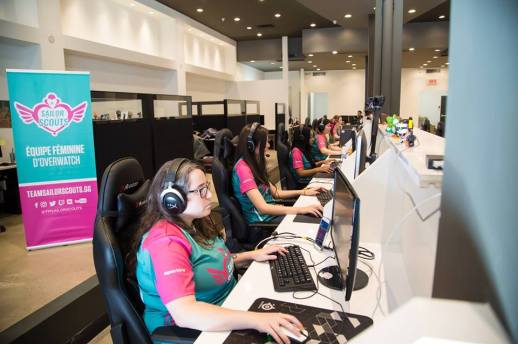 Esports is a growing phenomenon that is surpassing even the gaming world. It is a form of competitive gaming. Now team gaming has been going on for years but Esports is a little different. These competitions have it all; professional players, live broadcasts and cash prizes. It has even made it onto ESPN. The one thing that seems to be lacking in the field is female competitors. Team Sailor Scouts is working hard to change that.

Team Sailor Scouts is a group of female gamers who compete in Esports playing Overwatch. This young team of women is taking the field by storm from Canada.

The team meet at Meltdown, an Esports bar. There they discovered a few things. They all loved gaming. There was a lack of female teams and they wanted to change that. Thusly the seeds were planted for Team Sailor Scouts were sown. Funny enough none of the members had known each other previously. They were brought together by a love of gaming.

The team has meetings throughout the week to play together. Twice a month there is a big meetup to exchange information. The Scouts also try to make time to hang out together outside of gaming as well. Every member of the team is considered important and they want to make sure everyone feels that way.

Team Sailor Scouts have a two fold mission that they are trying to achieve, well other then kicking some serious butt in Overwatch that is. The Scouts want each player to reach her maximum potential. They also, of course, to introduce more women to Esports. They hope to achieve this mission statement by doing what they love, gaming. They know that the best way to get women included is by making space for women to be able to game. To really compete and win against all kinds of gamers.

The members of Team Sailor Scouts are:

Team Sailor Scouts are proof that women can make more space for themselves in the world of gaming by fighting like a girl.