People complain that feminists call “misogyny!” about everything. The truth is, misogyny and sexism are so systemically ingrained in our culture that both men and women actively participate in patriarchal values, without realization or intention. Many people either don’t see it or they simply disregard it as “the way things are” and make no move to change it. That is why I wholeheartedly agree with the second argument in the image below: 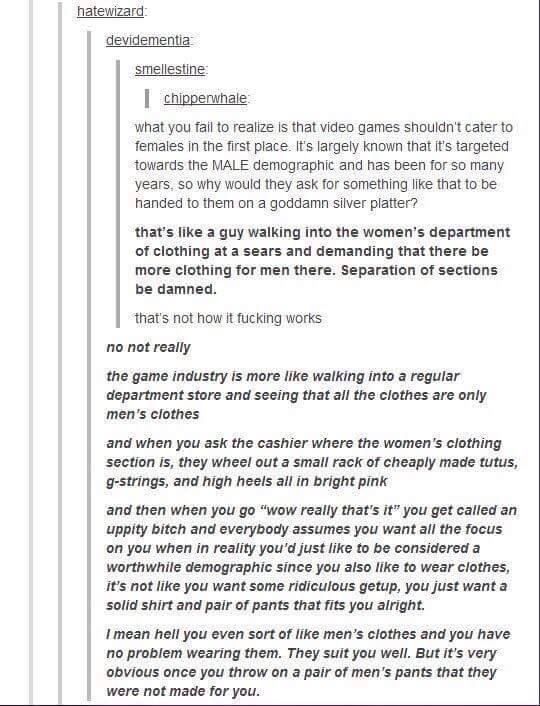 The analogy rings quite true. As a female gamer myself, it is often extremely difficult to find representation in the gaming world. And, to be quite honest, representation is actually extremely important. Not only is a lack of female characters telling me that my demographic isn’t important enough to warrant thought, but it is also depriving young girls and other minorities of role models they can relate to. When children are growing up, they choose people to look up to. If they are constantly seeing characters who look like them being excluded or portrayed as inferior, they start to feel inferior and thus internalize misogyny (or other forms of bigotry like racism and homophobia), which can sometimes be more dangerous to their well being than external discrimination.

In the current market, the majority of video game role models are white male characters. Do only white males play video games? No. So why do video games and consoles continue to be marketed almost exclusively to them?

Some will say, like the first argument in the image above, that women don’t play video games. It has been a long-held stereotype that women either don’t play games or that the majority of women “gamers” play mobile puzzle games, which can’t be considered gaming. Well, according to a 2015 study by The Entertainment Software Association, this isn’t correct. Adult women make up 33% of all gamers, with 11% of gamers being girls under 18 (44% total). Teenage boys make up 15% of all gamers, while adult males make up 41% (56% total). A similar study from 2014 (also from the ESA) states that, while mobile games have grown quite large in popularity, the audience for console and computer games is a nearly even 50-50 split between male and female gamers (48% women – 52% men).

Some will also say that it’s because men were the sole demographic for video games for decades and that the market can’t change overnight. Sure, this might be true. The market can’t change overnight, but it’s 2015. In the ESA study above, the average female gamer has been playing for 13 years. The gaming industry has had years to make these changes (it’s been at least a decade, probably more, since I first saw that people were talking about this issue) and they’re going about it all wrong.

Instead of creating vibrant and strong female characters with good backstories, big name developers are (more often than not) creating empty shells of female characters just to fill a PC requirement to avoid being accused of sexism. I’m sure I can speak for most of us when I say that this just isn’t right. How about, instead of creating new, half-assed characters to stick into the game, devs take some existing white, male characters and modify them? I can guarantee that their back story and personality would only need minimal tweaking to make this change. The same goes for representation of people of color and those of the LGBT+ community.

Take Fable III, for example. This game gives you two options to play as: male or female. Does your choice affect the game at all? No, not really. The only changes are the love interest at the beginning, the initial clothing, and a few personal pronouns in dialogue. The story line is the same, all the quests are the same, and the fact that you can romance both male and female NPCs is the same. Does playing as a woman lessen the game in any way? No. Is the female hero an empty shell of a character without any depth? No.

Instead of creating empty and uninteresting characters to fulfill some sort of PC requirement, devs can modify the characters they already have and/or create options, like Fable III. This will still allow the devs to make the game they want to make while being inclusive. This eliminates the problem, to use the metaphor in the above image, of a woman walking into a department store and only finding one rack of poorly-crafted, skimpy clothing made for women among a sea of men’s clothing.

For those who say that accuracy should also play a role in this, you’re right. It should. Women make up 49.6% of the total population in the world. Women are in the military; women are in the higher classes; and women are in the seedy underbelly of the crime world. So why aren’t they being represented in games that portray these communities? Because our society holds on to and promotes stereotypes instead of having the guts to prove them wrong.

I don’t, for the life of me, claim to know anything about creating a video game. I know that I neither have the skills nor the know-how to build a game from scratch. I am also not saying that the gaming industry hasn’t made large strides in the last decade in regards to female representation (games like Dragon Age and Mass Effect are amazing for representation and customization). I am simply speaking from the perspective of a female gamer who grew up watching as the boys always became heroes while the girls were always damsels in distress.

I think more progress can be made faster if we stop clinging to untrue stereotypes about female gamers and recognize that women are are a valid and worthy demographic for the gaming industry. Several studies have been conducted and the fans are trying desperately to be recognized, so it’s time to spend the money and the time to not only market to the female demographic, but to also include more female representation in video games.

Check back tomorrow evening for “Representation in Gaming, A Male Perspective,” a counter argument by Trever Bierschbach.

One thought on “Representation in Video Games, a Female Perspective”