Happy April and welcome to this month’s edition of Games to Get Excited About! This month we’re taking a look at No Man’s Sky.

No Man’s Sky is a game you may have been hearing about for a while. The game is the brainchild of Sean Murray, formerly of the Burnout series, and was unveiled by developer Hello Games and publisher Sony back at E3 2014. The game generated a lot of buzz for its popping visual style and promise of seamless gameplay. A particular standout for me was the part near the end of the trailer where the player hops in their spaceship on the surface of one world, then flies into space and down towards the surface of a neighboring planet with nary a loading screen in sight. With a heavy emphasis on freedom and exploration the game made a positive first impression for many gamers. That early reveal was a tantalizing glimpse of the project’s potential, but it left a lot of questions in its wake. 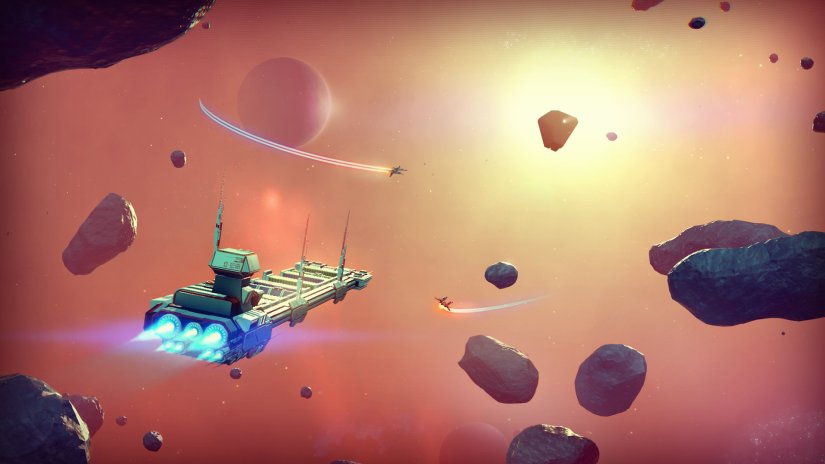 No Man’s Sky promises a LOT of space

How Does It Work?

One of the first things that was revealed about No Man’s Sky is it’s scale. The game promises 18 Quintillion unique planets to explore. Obviously it would be impossible for any designer to come up with that much content so instead the game universe is proceduraly generated from seed code that mixes and matches from potential combinations of traits for planets including the atmosphere, biome, geography, and presence of intelligent life. The game renders that in real time as the player explores, and discards it when the player is not present. What makes this interesting is that any player who goes to the same spot will see the same things but the game doesn’t need to use the processing power to depict more than a infinitesimal fraction of its vast universe.

What Do You Do?

Hello Games has talked a lot about the scale of the game and the math that makes it possible. It’s obvious that they are proud of the work they’ve done, and rightly so. But the promise of an infinite universe only gets you so far if that universe isn’t full of interesting things to do. Details on the actual gameplay have been scarce until recently. So what can you do in a playground of this frankly unimaginable size?

The primary motivation of the game is exploration itself. Every planet you discover, every alien creature, and every landmark will be tagged as your discovery. A lot of the initial draw for the game will simply be seeing what is waiting over the next hill, on the next moon, past the next star… The eventual goal will be to make your way to the center of the Universe. As you progress further towards the center the game will become more challenging. Planets will become more dangerous, not only will they have stronger and more aggressive creatures, but they will also have extreme temperatures, toxic atmospheres, and other hazards. In order to survive you will need to upgrade your spacesuit and weapon to overcome the challenges. More dangerous planets will yield more valuable resources which you can use to craft more powerful upgrades. Crafting will utilize the game’s periodic table as you synthesize compounds from the raw elements you obtain from mining, scavenging ruins, and salvaging enemy robots and ships.

Your ship can be upgraded as well, to improve your speed, weapons and defenses, and even your FTL drive so that you can jump further and speed your progress towards your goal. Space provides its own challenges in the form of factions that can ally with or attack you based on your behavior. If you act like a pirate, don’t be surprised when the local faction drops a hunter killer fleet into your system to deal with you. But if you move to a sector controlled by that faction’s rivals they may reward you for attacking their enemies and give you preferential prices on trades. You can even take part in large scale space battles between factions that happen based on ongoing changes in the persistent universe.

A Shared But Lonely Universe

No Man’s Sky is an online game and the marks you make on it with your discoveries and interactions with factions will leave a permanent mark on the universe of the game. With that said, Hello Games has crafted what promises to be a strangely solitary experience. With the magnitude of the game’s universe it will be a very rare occurrence for players to run into other players. The game doesn’t provide any way to track other players or party with them. It doesn’t even incorporate any way to talk to each other. In some ways this design ethos reminds me of Journey. It will be interesting to see whether people coordinate outside the game to meet up within it. Will we see a galactic mapping project, or a safe planet become a de facto meetup spot? Will we see players build a structure around potential PvP? This is one part of the game which will probably surprise even the developers once it is released. 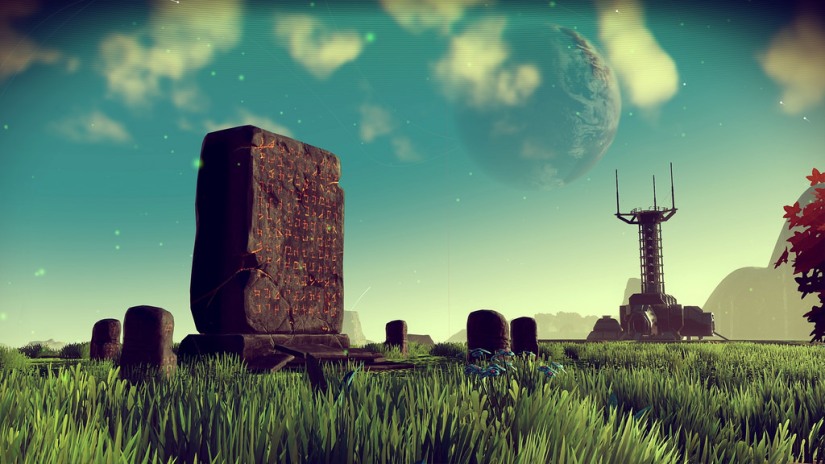 So Why Get Excited?

No Man’s Sky is promising to bring an unprecedented amount of scale to a genre of game that has always benefited from having wider horizons. The ultimate question of whether the game is mechanically satisfying and rewarding to play won’t be answerable until the game is in our hands but the game has a staggering amount of potential. To get an idea of why I’m excited look at the picture above this paragraph. In the foreground there is a stone tablet that will help you decipher an alien language so you can better communicate with that faction. In the background is a small outpost of some kind. Maybe it’s a trading post, or maybe it’s home to some unfriendly natives. In the sky is a moon or sister planet that you can fly to with no loading or instancing of any kind. No Man’s Sky offers the final realization in some ways of that old game developer’s promise: If you can see it, you can get to it.

That level of seamless exploration is something that I have been waiting for since I started gaming. With high expectations there is always the potential for disappointment, but at this point I can’t help but be optimistic. Wherever the game ends up taking me, it is a journey I’m looking forward to taking.

No Man’s Sky releases for PC and the PlayStation 4 on June 21, 2016. The game will have a physical and digital release and there are two collector’s editions including a PC only edition that comes with a model space ship in case the digital ship isn’t enough for you.

Lindsay Wells is a writer currently working on two novel projects. She has a short story published with Zelmer Pulp in the anthology Trumpocalypse, a series of what-if worst case scenarios. Her story, Walled In, takes a look at a potential post apocalyptic future through the lens of Lovecraftian horror. Her novel projects include a fantasy adventure romance that takes winter myths and turns them on their ear, and a collaborative steampunk adventure project that she started with her husband for NaNoWriMo 2017. View all posts by StarsAndSnows

2 thoughts on “Games to Get Excited About: No Man’s Sky”