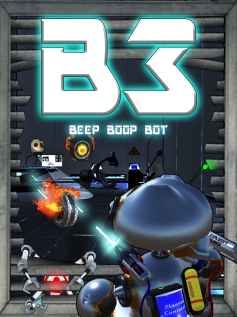 upcoming indie game, B3: Beep Boop Bot. Here’s what they had to say:

What’s it about?
Our game is an arcade style robot shooter about an out-of-date robot that is activated to take on other robots in a space center that have become AI aware. It will have a campaign mode and a survival mode, a leaders board on steam for high scores, and, if our Kickstarter does well after we launch it, then we will also expand to have multiplayer options.

What was your inspiration?
Our inspiration for this game just kinda grew from nothing. I mean, we both have always been hardcore gamers with a desire to create a game, but the concept itself grew over time. It started with a basic robot running around a room shooting stuff. After that, we released a few demos. Being in the Army, I was able to test it on a bunch of Soldiers who lived in the barracks.

With that, we grew the game into something more, based off what the players liked, didn’t like and what they wanted. After that we released another demo on twitter to streamers and YouTubers. From that, we are in the process of making more improvements and changes. It really has been a fan input created game.

When will it be released?
We don’t have a release date, but I want to say early 2017. It’s hard to say, though. We will have a new demo in a few months that represents the final game.