First, I want to thank you for taking the time to share your opinions with us. We are 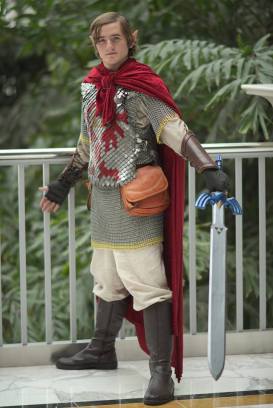 excited to hear from you!

Thanks, I love doing interviews. Glad you wanted me to come on.

So, what was your first experience with gaming?

My first experience with games was around 1999, I was at a friend’s house, they had an NES set up in the living room and we played Super Mario Bros. It was really fun and the next day me and my mom went to a used games store and got an NES. The first games I got were Super Mario Bros (all three), The Legend of Zelda, and Star Force.

Do you currently game?

Not very often hahaha, too busy. I always make sure to get a new Zelda game when it comes out, but aside from 3ds stuff I don’t play games very often. Fire Emblem Awakening, Bravely Default, and Super Smash Bros. 4 are what I’m playing right now.

If so, what system(s) do you prefer?

I’ll probably play just about anything if it’s fun to play, but I’ve noticed that games which involve some sort of strategy really appeal to me. Command and Conquer is a good Real Time Strategy series, but Tiberium Wars was the only good game in that series after Westwood got bought out by EA. Fire Emblem is my favorite turn based strategy game.

What are you playing most at the moment?

Medieval Eugenics Simulator 2013, also known as Fire Emblem: Awakening hahaha. I got it last year and I’ve played through it probably four or five times already.

Ocarina of Time is by far my favorite game, everything else is a distant second.

It’s fairly obvious that you have a connection to Link: what sparked that level of dedication?

In 2001 I got a Nintendo 64 on my birthday. I also got Ocarina of Time, Majora’s Mask, Super Mario 64, and Star Fox 64. I started playing Ocarina of Time first, literally didn’t even touch any of the other games till I had beaten it. Up till then I had never played a three dimensional game. I remember being absolutely blown away by how real it felt to run around as Link in a three dimensional world, it felt almost like really being part of the adventure. Every time I go out in costume I remember that feeling.

A few years ago I was just browsing the internet, I think I was looking up how to get a heart piece in one of the Zelda games or something like that. I ran across a picture of a cosplayer named Li Kovacs in her Twilight Princess Link costume. At the time I had no idea what Cosplay was but I just remember thinking something along the lines of “holy shit, that is really cool.” And I started working on my own stuff shortly after.

I see that you also play the trumpet. Is that a talent that you brought into your cosplay, or did you learn after you started cosplaying?

I started playing trumpet for school a long time ago. The first time I incorporated music onto my costume was at MAGFest (Music and Gaming Festival) in 2013. I decided to go to the convention literally like 2 days in advance because I heard Zelda Reorchestrated was going to be there. I really wanted to meet them but I had no idea what any of them looked like. The only way I could think of to get their attention was with music hahaha so I memorized a bunch of Zelda music on my trumpet and started playing it in the hallways when I got to the convention. Not only did I get to meet all the ZREO guys (I’m now friends with all of them) but I also ended up creating a trend of hallway music at the convention and now people always run up and request a song or ask where I’m going to be playing later if I don’t have my instrument on me. It’s nice to get some recognition for my work.

Your costumes are amazing and your attention to detail is magnificent. What is the most important part of putting a costume together for you?

The metal, I got into metal working when I made a hauberk of chainmail for my first Link costume. Most of my focus when making costumes goes into making sure all the metal parts are absolutely perfect. The rest ends up almost being an afterthought in comparison. A good example is the replica swords I make, they typically take about 30-40 hours to make, whereas all the fabric work I’ve ever done probably totals about 30 hours.

What is your favorite thing about cosplaying?

I enjoy meeting other people the most. Most of my closest friends are people I’ve met at conventions and ended up staying in contact with. Its nice because my friends are spread out all over the country, so no matter where I go there are people to hang out with.

Actually, surprisingly easy. A lot of cosplayers don’t do it because the concept of working with metal sounds daunting, but chainmail doesn’t require any specialized skills or tools to make. I made my first hauberk when I was in high school with stuff I just had laying around. There are lots of tutorials online on how to do it.

What cosplay project has challenged you the most?

The scale armor costume, I call it Red Mail after the final armor upgrade from A Link to the Past. The costume has 90 pounds of steel armor on it, all handmade, I can make about a pound of armor per hour when it comes to chainmail and scale armor, all in all the costume took about 120 hours and is by far the most complicated project I’ve ever undertaken.

What cosplay are you the most proud of?

What is the best experience you’ve ever had while cosplaying?

This is impossible to answer, it’s just always such a blast.

I know that you’ve judged contests; what qualities do you look for in other people’s cosplay costumes?

It really depends on the kind of costume a person has made. One of my personal favorite things to see though is realistic versions of characters. The most amazing costume I ever saw was a version of Belle from Beauty and the Beast where the person actually made it like a historical dress with all the right materials. She looked just like her too and it was just so perfect, I could actually believe she was Belle. It’s really exciting to meet somebody with a costume so believable that I feel like they could actually be that person in real life. Those people usually get an instant 10/10.

There is always controversy in any community, and cosplay is no exception. How do you feel about current attitudes in the cosplay community toward gender, body type, or race effecting a person’s costume?

Cosplay is about being a different person for a day, telling people they can’t Cosplay as a character because they don’t look or act similar completely defeats the purpose. That said, I will typically fanboy like 10x harder if somebody also looks exactly like the character. A while ago I met a Michonne cosplayer (Walking Dead), she had the right hair, the right face, the right body, all the equipment was right, it was just amazing. It’s not necessary to look like the character, but it’s definitely bonus points when it happens just right.

What are your opinions on Cosplay is Not Consent? Have you ever experienced harassment or bullying while in cosplay?

I agree that Cosplay is Not Consent, but I do have a problem with the movement. My problem is how frequently public shaming of “harassers” on the internet is used as retaliation. A lot of people who do this don’t realize just how powerful of a weapon the internet is. The internet is a global information grid, and when something goes viral, the corresponding effect is also global. If somebody posts a photo of someone on tumblr and says the person harassed them, true or not, the post can get millions of reblogs and now that person can never show their face at a convention again. Even if the person did say something wrong, that’s excessive. It’s like trying to swat a fly with a nuclear warhead. So, while I agree with Cosplay is Not Consent, I don’t think the internet is the right place for movements like that.

For the sake of having fun cosplaying in the hallways it’s all the same to me, because that’s just about having fun as the character. The difference shows up in competition. There are really three different types of costumes, bought, crafted, and hybrid. Since craftsmanship is a major category in most contests, you typically can’t enter with a bought costume. Hybrid costumes are costumes where you bought some pieces and made others (IE you made the tunic, but bought the boots and gloves) this is what I’d say most cosplayers wear. This is completely fine for the sake of competition, as long as you mention what parts you didn’t make.

What advice would you give to someone who is just starting out with cosplay?

Just have fun with it and don’t take it too seriously. After all, if you think about it, you’re spending money to run around as a fictional character, the hobby is inherently derpy, so just have a good time being derpy!

Is there anything else you’d like to put out there to everyone reading?

Yeah, if anybody wants to check out my work, my fanpage is www.facebook.com/SiegfriedCosplay and siegfriedcosplay.deviantart.com is my deviantart. I make custom combat grade swords based on swords from videogames.

Thank you so much for chatting with us and our fans! We hope to chat with you again soon!

Glad to be here, thanks for the interview. I’d love to do it again sometime

And an extra special Thank You for doing this interview on your Birthday!

Happy Birthday from all the Ladies at Real Women of Gaming!

I am one geeky woman filled with the knowledge of role playing systems and video games long forgotten. Also known as, Your Vampire Goddess. (There is even a drink named after me) I am the Head Goddess of Real Women of Gaming. I play video games, trading card games, board games, role playing games/table top games. I don't even have an inner geek, I wear it loud and proud. I'm attached to several fandoms (Doctor Who; Sherlock; Supernatural; Harry Potter; Hunger Games; Firefly; Star Trek; Star Wars) And that doesn't include my anime obsessions (Deathnote; Ouran High school Host Club; Black Butler; Bleach; Inuyasha; Blood+) to name a few, how much I am into Cosplay, Renaissance festivals, Tinker Bell, Tattoos (I have several), Goth/Steampunk anything. You name it and I seriously obsess over it. View more posts