I had the pleasure to be able to sit down and do an interview with Brittany from Unique Wreaths By Brittany. What ARE these you might be asking? These are some of the most fabulously geeky wreaths I’ve ever seen. Well….read the interview to check it out! 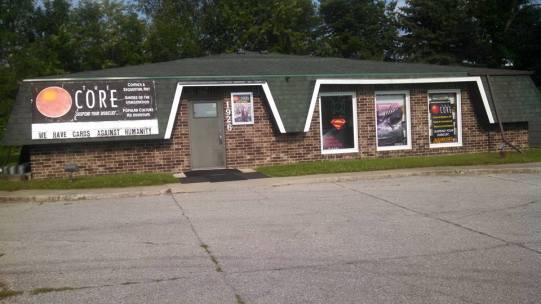 We started out by meeting at The Core. Its a comic shop in Cedar Falls Iowa that is so much more than comics, and where Brittany now also sells her wreaths. When I walked in, Brittany was already in attendance and waiting for me, and had let the gentlemen there know I was coming. He was very courteous and friendly and was letting us use one of the tables even though they had a tabletop gaming group coming in shortly. I liked him already.

I sat down and Brittany and I commenced our interview.

QoH: We’re here to talk about Brittany’s Geeky Wreaths. what brought her to do them, and the path she sees for herself. *laughter* I know! You didn’t see that coming did you? But first! What brought you to do the wreaths?

Brittany: Oh…I don’t know. I was on Pinterest one day and going through all these different wreaths and I was like, yeah, these are pretty nice, but, I have a better idea. So I started brainstorming on what I wanted to do for my first one. I decided to do a Tortoro one with flowers on it and it ended up turning out pretty great. I had a bunch of friends tell me it was awesome and I should make my own business out of it and that’s how it started. Ever since I’ve been making them for people and started recently selling them at The Core.

QoH: Now, did you intend to start making them with the “Geeky” theme, or was that something you were intent on because of your geeky interest, or was it something you wanted personally then people started coming to you with more ideas?

Brittany: I had planned it first for myself, then everyone was like, oooh! Make one for me! And I was just like, ok, how much would you pay for one? *laughs* And it just kind of went from there.

QoH: Ok. So what kind of Genres do you do for your wreaths?

Brittany: Anything, really. You can put in requests for different themes. So far I’ve done Batman, Nightmare before Christmas, Star Wars, Firefly, Totoro, Futurama, really anything you can think of.

QoH: What made you think to expand and bring them into The Core?

Brittany: That was kind of a random thing. I first went to Limited Edition and they wouldn’t even acknowledge me, basically blew me off. So I came into the Core and they mentioned something about LE and I told them about how they were and how they blew me off. And then the guy that owns the Core overheard me and asked what I was talking about. So I told him all about them and how I wanted to expand and sell them in a store. He wanted me to put something together and to talk out a deal and we did and I’ve been selling them out of here for about a month now.

QoH: That’s awesome!. So, do you have any ideas about expanding into something other than wreaths in the future? Have you thought any on it?

Brittany: I haven’t thought that far ahead yet. I just think about themes really. I have some really awesome ideas for like, Legend of Zelda and Super Mario Brothers, Bobs Burgers, things like that. Just, all kinds of ideas.

QoH: Now…we’re going to stray for just a few minutes. You said you have the geeky interests…now, what kind of gaming do you do. I have to ask!

Brittany: Usually if I do gaming I do platform gaming. I don’t generally have time for anything else between work and being a mother. That’s pretty much about it for me. Otherwise I’ve been really digging the Binding of Issac lately. I’ve been playing games since I can remember on our Nintendo.

QoH: So is that your favorite console then, anything Nintendo? *laughs*

QoH: If you had the time would you try to expand out into table top and the RPG’s?

Brittany: Probably. I just know with my time I haven’t been able to explore it.

QoH: Right right. What are some of  your favorite Sci-Fi/Fantasy/Anime Etc…?

Brittany: I’m a big Star Wars, Dr. Who and oh gosh! Where do I start? Red Dwarf.

QoH: That’s kind of an esoteric one to like…Red Dwarf. Not alot of people even know what that is.

Brittany: Right. Uh, I’m really old school. I like the older stuff. I’m not a Star Trek fan, I started collecting the Star Wars ships and everything when I was younger and now have a room in my house dedicated to the Star Wars movies. For Anime I love all kinds. Sailor Moon, Fruits Basket, Chobits, Attack on Titan, Inuyasha…I could go on forever really on all the stuff I like.

QoH: Have you ever done cosplay, and if not, do you want to?

Brittany: No, but I want to. I already have my first one planned. I want to go as Copycat from the Deadpool comics.

QoH: Now, coming back to the wreaths, do you use allot of your favorites in your wreaths?

Brittany: Yeah. I just kind of went with one idea, but there’s no limit to this. I could make anything I want, and that’s what I did.

QoH: Do you have anything you’d like to expand on? Any thoughts you’d like to share about the wreaths, yourself, how to get ahold of you?

Brittany: As far as the wreaths go, I don’t use any templates, and I literally cut everything out by hand. Its all custom made. No two are the same. You’re getting a one of a kind wreath. Pricing is by wreath, going by materials and time for me to make it. They can be pricey but worth it.  They’re available at The Core. You can put in different requests for different themes. Just let the guys know and they’ll contact me. Or, get ahold of me on my facebook site.

QoH: Sweetness. Well, thank you! And thank you guys here at The Core!

Now, after our interview, we wandered around the store a bit, I ended up getting myself several comics while the gaming guys got set up for their night of rivalry and I got some fabulous chuckles. You can find both Unique Wreaths by Brittany and The Core on Facebook. 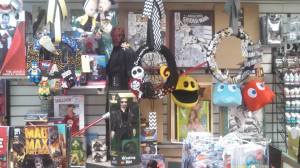 Just a few of her wreaths behind their front cash register.

Published by Queen of Hell

I'm more a techy geek than anything else, but I love my games too. Watching, playing, its all good to me. My main forte though is online roleplaying, though I have a weakness for anything Mortal Kombat. I could miss any date night for a good Mortal Kombat marathon. I work too much and play too little and find my zen through my games, online and off. I'm a no nonsense kinda girl that will tell it how it is, but also give some comic relief when needed. I'm good with the comic relief. View more posts